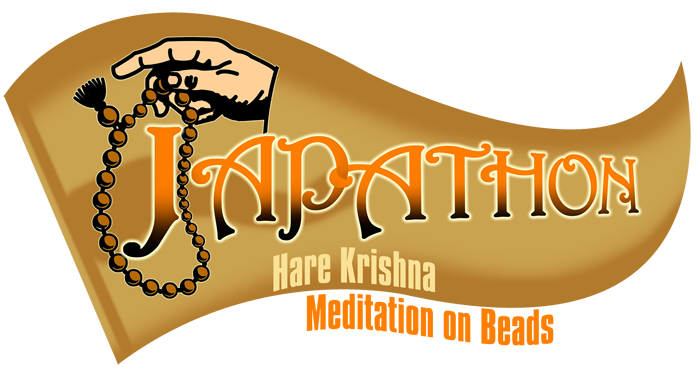 All welcome. We’ll loan you a set of Beads!

Lunch offered at Noon both temple. 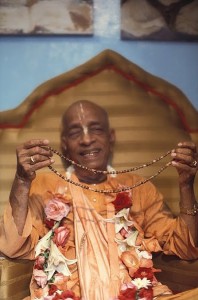 The idea is to chant as many rounds of japa mala as possible, even up to the point of chanting one mantra Hare Krishna Hare Krishna Krishna Krishna Hare Hare/Hare Rama Hare Rama Rama Rama Hare Hare for each and every person in the state of Utah, 2.7 million. Participants are welcome to chant at home and/or come to the temple for a noon arati, vegetarian feast, and japa chanting in the temple room all afternoon long. A board will be placed in the temple room with the names of chanters and the mounting totals of rounds. Any visitor to the temple on that day will be loaned a set of beads and asked to chant at least one round. Last year for the annual japathon the achievement was 864 rounds, a record we hope to smash this year, with the help of all well wishers.

Devotees start off the New Year trying to chant 1,000,000 names of God, or 950 rounds on their rosaries. It takes about ten minutes to chant a round (864 names of God). Devotees begin at home, come to the temple, attend the noon arati, enjoy a pot luck vegetarian feast (to which everyone is invited), and continue chanting thru the afternoon until the evening arati at 6 pm. All guests will be loaned a set of beads and invited to chant at least one round. All names and totals will be written on a board.

Here is an article from the Daily Herald written by Caleb Warnock about the Japathon 2011:

The people of Utah were given a massive gift on New Year’s Day, meant to bring peace, happiness and blessings.

Devotees worshiping at the Krishna Temple in Spanish Fork spent the day chanting the names of God one million times, the first time such a feat has ever been accomplished in Utah, according to temple officials.

“How can you start the New Year off any other way?” he said. “It sets the tone and course for the year.”

Worship at the Krishna Temple, which is also known as the Lotus Temple, and the Sri Sri Radha Temple, is always a joy-centered experience, and Saturday was no exception. In addition to a feast at noon, worshipers sang, danced and chanted in the temple sanctuary before a hand-carved altar marked with traditional offerings, flower leis and lush green plants.

Das said he liked to explain the significance of the New Year event by likening it to proxy ceremonies in The Church of Jesus Christ of Latter-day Saints.
“We are doing it for all the people who live here,” he said of the state of Utah. “We would like to do one name of God for every resident, if we could. Our mood is that we are going to donate our blessings to our fellow Utah’s.”

BYU senior anthropology student Whitney Andersen attended Saturday’s ceremony with two friends, Karthik Chandrasekaran and Vegin Abraham Varghese, both of India, here in the U.S. working as temporary consultants for Novell. Since both men speak Hindi, Andersen said she thought attending the temple event would be a fun break. Both men said they were surprised to find such a Hindu temple in Utah County.

“I’m very interested in other cultures, and more exposure to the different aspects of different societies is good for me,” Andersen said. She is not a Hindu worshiper, but when she was invited to join in a round of chanting 108 names of God, she leapt at the opportunity.

“It’s good that they want to pray for the residents of Utah,” she said.
Her part in the ceremony began when she was given ritual sacramental water to sip from the palm of her hand. She was then given a string of beads to rub while chanting. Her chanting wasn’t as fast as the songlike repetitions of the more experienced worshipers, she said.

“The whole thing was new to me,” she said. “All of the senses are involved. That was really neat.”

Chandrasekaran said Saturday’s event was different than his normal Hindu worship in India, simply because of differing regional worship styles. After two months in Provo, he returns to India this week with mixed feelings. He would love to stay in the U.S., but he’s hungry, he said. As a Hindu, he is a vegetarian, and finding satisfying vegetarian food in Utah Valley has been a challenge. Everywhere he goes, he is offered either rice or salad, which he likened to eating “leaves. I am not a cow.” On the upside, he experienced snow for the first time while here, even though this is his third stint in America, and took advantage of the experience, Facebooking pictures of himself lying in the snow.