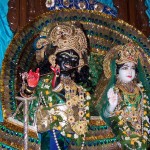 Krishna’s form is spiritual; it is not made of matter. In our present condition, with our material eyes, we cannot see Krishna. So He descends in an apparently material form as the deity in the temple to allow us to see Him and serve Him directly. For God there is no difference between material and […] 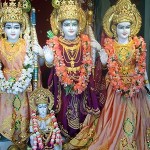 Millions of years ago, in the age called Treta-yuga, the Supreme Personality of Godhead descended as a king, Lord Rama, or Ramachandra, to establish the principles of religion, morality and righteousness. His pastimes were recorded by the poet Valmiki in the epic Ramayana. The Story of Lord Rama Ramachandra appeared in the Sun Dynasty as […] 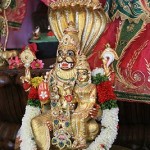 When in danger, devotees of Lord Krishna naturally turn to His fiercest form for protection. One of the most awe-inspiring of Lord Krishna’s forms is Sri Nrsimhadeva, His half-man, half-lion incarnation. Lord Nrsimha descended to protect His devotee Sri Prahlada Maharaja from the atheistic king Hiranyakashipu, Prahlada’s father. The Boy Saint Prahlada Sri Prahlada Maharaja […]