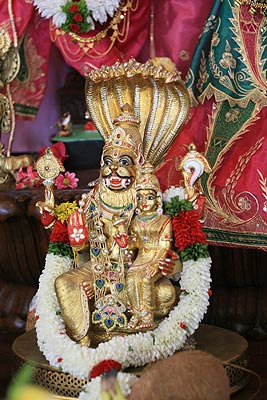 When in danger, devotees of Lord Krishna naturally turn to His fiercest form for protection.

One of the most awe-inspiring of Lord Krishna’s forms is Sri Nrsimhadeva, His half-man, half-lion incarnation. Lord Nrsimha descended to protect His devotee Sri Prahlada Maharaja from the atheistic king Hiranyakashipu, Prahlada’s father.

Sri Prahlada Maharaja was a devotee of Lord Krishna from birth, having acquired knowledge of devotional service in the womb. Once, during the absence of Hiranyakashipu, his enemies the demigods, servants of the Supreme Lord responsible for universal management, kidnapped his wife to kill her embryo. They feared that the embryo might later develop into another terrible enemy. Srila Narada Muni rescued the mother and child after convincing the demigods that the boy to be born was an exalted devotee of Lord Krishna.

While still in the womb during his mother’s stay at Narada Muni’s ashram, Prahlada overheard Narada’s transcendental discussions on the glories of the Lord and became fearless, fully surrendered to the infallible shelter of Lord Krishna. Later, though only a child of five years, he had firm faith in the Lord’s protection and invoked this same pure devotion to the Lord in the hearts of his schoolmates at the atheistic school of Sukracharya, the guru of the daityas, or atheistic descendents of Diti. Enraged at his son’s undeviating devotion to his worst enemy—Lord Vishnu, the four-handed form of Lord Krishna—Hiranyakashipu sentenced Prahlada to death. Hiranyakashipu’s henchmen tried everything to kill Prahlada. He was starved, poisoned, cursed by spells, beaten by fiends, stomped by elephants, encaged among virulent pythons, hurled from mountain peaks, and attacked with stones, fires, and blizzards. Despite all of Hiranyakashipu’s attempts, Prahlada remained untouched, and the evil king’s anger grew. 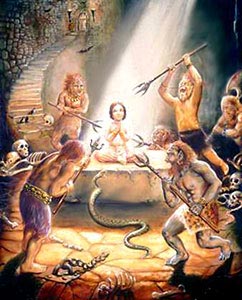 Hiranyakashipu’s enmity toward Lord Vishnu had begun when the Lord in His form as a giant boar had slain Hiranyakashipu’s twin brother, Hiranyaksha, who had upset the earth’s equilibrium by greedily mining for gold.

Upon the death of his brother, Hiranyakashipu had charged Lord Vishnu with partiality toward the demigods: “The Supreme Personality of Godhead has given up His natural tendency of equality toward the demons and demigods. Although He is the Supreme Person, now, influenced by maya [illusion], He has assumed the form of a boar to please His devotees, the demigods, just as a restless child leans toward someone.”

Factually the Lord is never partial to anyone: samo ‘ham sarva-bhuteshu na me dveshyo ‘sti na priyah (Bhagavad-gita 9.29). He simply reciprocates with every living entity in accordance with the living entities’ desires. Lord Sri Krishna instructs in the Bhagavad-gita (5.11):

“As all surrender unto Me, I reward them accordingly. Everyone follows My path in all respects, O son of Pritha.” Thus the Lord appears as death for the atheist and as the loving savior for His devotee. And He Himself is beyond any material affinity.

To take revenge for his brother’s death, the mighty daitya Hiranyakashipu vowed to satisfy his brother’s soul with Vishnu’s blood. In his quest for immortality and the power to defeat Vishnu, he performed humanly impossible penances through which he acquired boons from Lord Brahma, the creator of the universe. Hiranyakashipu thought he could become God by his own austerity and penance. He foolishly concluded that since Lord Vishnu was favoring the demigods, He must also be an ordinary conditioned living entity (influenced by partiality and hatred) who became God by austerities. This mentality is characteristic of Mayavadi philosophers, who maintain that every soul is God deluded by maya and that once the illusion is dispelled, the soul once again realizes its identity with God. This theory, however, is unacceptable when we consider the Supreme Personality of Godhead Lord Krishna’s supremacy, as He states in the Bhagavad-gita (9.10):

“This material nature, which is one of My energies, is working under My direction, O son of Kunti, producing all moving and nonmoving beings. Under its rule this manifestation is created and annihilated again and again.” The material energy, maya, is one of the many potencies of the Supreme Lord. Since maya is completely submissive to the Lord, there is no possibility of the Supreme Absolute Lord being overpowered by its influence. The living entities, however, being minute parts of the Lord, can be deluded. The Mayavada theory that after liberation the soul merges with God is refuted in the Bhagavad-gita (15.7, 2.12), where Krishna declares all jiva souls to be His parts eternally, remaining always distinct individuals.

The Mayavadis also assert that the highest conception of God is of the transcendental, impersonal, and all-pervading nirguna-brahma (Absolute Truth devoid of quality, attribute, or form), which assumes a material conditioned body like ours whenever it descends to this world. Thus for the Mayavadis, Lord Vishnu or Lord Krishna are saguna-brahma, Brahman with attributes and form, which to them means material illusory entanglement, for they just cannot imagine transcendence with qualities and form.

Frustrated with the suffering caused by the material body, the impersonalist philosophers conceive of transcendence and liberation as free from qualities and attributes. The Lord, however, clearly defies this notion:

“Unintelligent men, who do not know Me perfectly, think that I, the Supreme Personality of Godhead, Krishna, was impersonal before and have now assumed this personality. Due to their small knowledge, they do not know My higher nature, which is imperishable and supreme.” (Bhagavad-gita 7.24) Thus from the Bhagavad-gita we learn that Lord Krishna never worked to achieve Godhood. He is eternally the Supreme Absolute Truth, and the individual souls are eternally His parts. 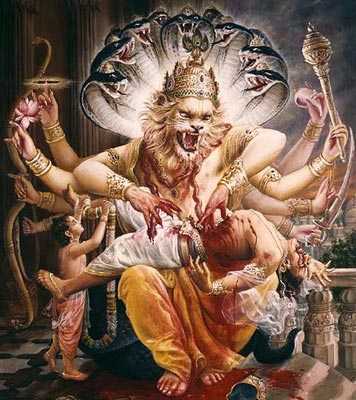 Just as the Mayavadis maintain the false theory that by enough penance a soul can become God, Hiranyakashipu considered that he could achieve immortal dominance over all and vanquish Lord Vishnu with his own prowess. But Prahlada challenged his power.
The arrogant Hiranyakashipu cursed him and inquired, “Where do you obtain the power to defy my supremacy?” “The source of my strength is Lord Vishnu,” replied the fearless Prahlada. “He is the source of everyone’s strength, including yours.”

To hear that his strength was the grace of Vishnu, his worst enemy, was the greatest insult for Hiranyakashipu, who challenged Prahlada, “O most unfortunate Prahlada, you have always described an all-pervading supreme controller beyond me. If He is everywhere, then why is He not present before me in this pillar? If he does not appear from this pillar, then today your head will be severed with my sword.” With these words, Hiranyakashipu struck his fist at the pillar, from which emanated a sound that seemed to crack the covering of the universe.
To prove true the statement of His devotee Prahlada, the Supreme Lord appeared from the pillar in a form never seen before, a form neither man nor lion, the form of Sri Nrsimhadeva.

The daitya cried out, “Alas, my chest, which is being ripped open by Nrsimhadeva at this moment, is the same chest that broke the tusks of Airavata, Indra’s elephant. It is the same chest that stayed free of scars despite being struck by Lord Shiva’s ax.” (Nrsimha Purana 44.30)
Nrsimhadeva ripped open the stonelike chest of Hiranyakashipu with His diamondlike nails. The Lord wore the intestines of the king as His victory garland, and to convince the demigods of Hiranyakashipu’s death, the Lord tore out the daitya’s heart. As another aspect of His divine play, the Lord was suddenly surprised to see that Hiranyakashipu’s body had disappeared. When He shook His hands, however, the torn pieces of Hiranyakashipu’s body fell out of His nails onto the ground. (Nrsimha Purana 44.32–35) From this we understand that Hiranyakashipu was an insignificant insect compared to the transcendental lion Lord Nrsimha. As Jayadeva Goswami confirms:

“O Keshava! O Lord of the universe! O Lord Hari, who have assumed the form of half man, half lion! All glories to You! Just as one can easily crush a wasp between one’s fingernails, so in the same way the body of the wasplike demon Hiranyakashipu has been ripped apart by the wonderful pointed nails on Your beautiful lotus hands.”

during the day or night (the Lord killed him at twilight)

by any human being or animal (Lord Nrsimha is half man, half lion)

by any demigod, demon, or great snake (the Lord is beyond any of these categories)

by any weapon or any entity, living or nonliving (Lord Nrsimha pierced the daitya with his nails, which are not considered weapons and are neither living nor dead) 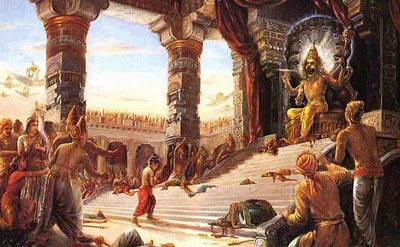 Finally, Hiranyakashipu was not be killed by any living being created by Brahma or not created by Brahma. Hiranyakashipu was cautious to ensure that he would also not be killed by Lord Brahma, Lord Shiva, and Lord Vishnu, the three presiding deities of the universe (the only three living entities within the universe not created by Brahma). Lord Nrsimha is a lila-avatara, or pastime incarnation of Lord Krishna, and is not of the category of Brahma, Shiva, or Vishnu, who are the three guna-avataras, or deities in charge of the three modes of material nature.

Hiranyakashipu, the universal tyrant, wished to reverse the system of piety. He wanted the impious to be rewarded and the pious to be punished. Thus upon the death of Hiranyakashipu, all the demigods and inhabitants of various planets offered their prayers to Lord Nrsimha, expressing their gratitude for the Lord’s slaying the daitya, who had usurped all their riches, wives, and shares of sacrificial offerings. Only Prahlada Maharaja, however, could pacify with loving prayers the transcendental wrath of Lord Nrsimha, who is prepared to even appear as half-man, half-lion for the sake of His pure devotees.

Lord Nrsimha was overjoyed upon beholding the firm faith of Prahlada, and He repeatedly requested him to ask for a boon. But the utmost compassionate Prahlada, who was more concerned for the welfare of others, only requested the Lord to liberate his demoniac father. The Supreme Lord guaranteed the liberation of twenty-one generations of Prahlada’s dynasty.