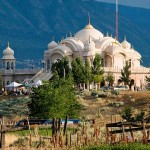 The thesis of this paper will address one major question: Why would a Hare Krishna consider locating a temple in low density, rural area of Mormon-dominated Utah? “Utah’s Krishna Pioneers”  by Chad Young This piece was written for a history class at BYU in 1994 Hinduism is one of the great religions of the world. […] 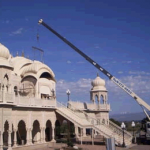 Situated on an elevated 15 acre plot in rural Utah, this 50′ high temple will be modeled after a famous devotional palace in India called Kusum Sarovar (temple on a lake of flowers). It will have a main dome 25′ in diameter surrounded by 12 other domes. There will be 108 arches and columns, sculptures, […] 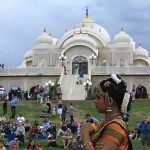 Two dedicated disciples of Srila Prabhupada have brought Krishna consciousness to the heart of Mormon country in grand style. According to folklore, Bishop John Coyle, a popular Mormon leader, publicly prophesied in 1947 that a great temple would be built on a certain hill in Spanish Fork, Utah. March/April 2010. Two dedicated disciples of Srila […]