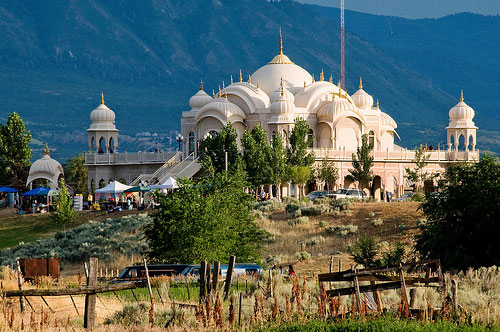 Two dedicated disciples of Srila Prabhupada have brought Krishna consciousness to the heart of Mormon country in grand style. According to folklore, Bishop John Coyle, a popular Mormon leader, publicly prophesied in 1947 that a great temple would be built on a certain hill in Spanish Fork, Utah.

March/April 2010. Two dedicated disciples of Srila Prabhupada have brought Krishna consciousness to the heart of Mormon country in grand style.

According to folklore, Bishop John Coyle, a popular Mormon leader, publicly prophesied in 1947 that a great temple would be built on a certain hill in Spanish Fork, Utah. He probably had something different in mind from what stands there today: a majestic Rajasthani-style temple of the International Society for Krishna Consciousness. In 1982 two of Srila Prabhupada’s enthusiastic and innovative disciples, Charu Dasa and his wife, Vaibhavi Devi Dasi, arrived in Spanish Fork to start a Hare Krishna center. One result of their dedicated efforts is that the temple they built on a hill now draws approximately fifty thousand visitors a year.

The temple lies in a scenic valley surrounded by a gorgeous mountain range. Hand-carved lotuses designed by Vaibhavi adorn the ceiling of the immaculate temple room. Radha-Krishna, Sita-Rama, and Gaura-Nitai are the beautiful presiding deities. What was once a single two-story log house, which served as the temple and residence, has evolved into a fifty-foot-high palace that hosts spiritual retreats, yoga classes, and lively Sunday feasts. The pioneering spirit in the hearts of Charu and Vaibhavi found a perfect setting in a place that even today is home to cowboys and missionaries.

Of course, it didn’t manifest in a day. For several years Charu and Vaibhavi employed their energies in raising funds for the temple.

“We jokingly call this ‘The Temple that Cookies Built,’” remarked Sri Hanuman Dasa, a resident devotee from Utah who has served the temple for two years as a preacher and yoga teacher. Besides fifteen years of diligent prasadam distribution—Charu remembers selling cookies wearing electric gloves in the middle of nearby Arizona’s sub-zero winters—training and selling llamas in the 1980s provided substantial revenue for building the temple. Taking early advantage of a national fad for keeping llamas as pets and using them as packers on camping expeditions, Charu and Vaibhavi became trendsetters in the llama trade.
“At one point we needed $8,000 to finish part of the construction,” Vaibhavi recalled. “We had a lovely llama named Syamine (she had a bluish-black hue like Lord Krishna’s). A man looking for a llama to give his daughter walked in, saw Syamine and asked, ‘How much?’

“He wrote a check on the spot.”

The temple conducts daily tours for a steady stream of visitors, including the nearly three thousand students who come on three-hour field trips each year. The beauty and sanctity of the temple and the grounds never fail to impress. A popular gift shop, a prasadam buffet, and a menagerie of exotic animals (including forty llamas, twelve peacocks, three cows, and five parrots) charm the guests. Comments from the guest book reveal enthusiastic appreciation: “I love this place,” “Stunning,” and “Absolutely beautiful” are samples.

A small but dedicated group of full-time devotees assist in the maintenance, while local volunteers, mainly teenage boys and girls from troubled backgrounds, account for the rest of the labor. Besides training and organizing the volunteers, Vaibhavi also leads them in kirtana and an evening Bhagavad-gita discussion.

Although the temple has much to offer as a tourist attraction (it is listed in Amazing and Unusual Places in the US as a “must-see”), preaching and outreach are the focus of the activities. The temple sponsors eight major festivals a year, the most popular being the Festival of Colors (Holi). Over fifteen thousand people flock to Spanish Fork in March to splash in fifty thousand bags of colored powder shipped from India. The major Utah newspapers always cover the event, as well as the India Fest, Llama Festival, and Diwali. Some professors at Brigham Young University award students extra credit for attending the festivals.

Utah’s political leaders widely acknowledge and respect the temple. Both present governor Gary Herbert and the previous governor, Jon Huntsman, have visited the temple and received copies of Srila Prabhupada’s books. For six years running, the governor’s mansion has hosted a Diwali celebration, complete with puja, a talk given by Charu, and a vegetarian feast.

Charu and Vaibhavi were experienced devotees from the early 1970s and helped manage centers in Australia and Berkeley, California. Charu was a leading book distributor in the 1970s with aspirations to start a center.

“I distributed books for ten years, and I dreamed of opening a center where people would come and be attracted to Krishna consciousness. I wanted as far as possible to replicate the spiritual world, where people would walk through the door and say, ‘Tell me all about it.’”

Under their leadership, the temple is steadily building a spiritual community of sincere and committed members from the local area. Charu is frequently called upon to speak at interfaith gatherings and serves as a priest for various functions such as weddings and name-giving ceremonies. He has cultivated positive connections with the Hindu congregation in Salt Lake City (about fifty miles away) and is regularly invited to lecture in the homes of prominent families. The temple also enjoys favorable relations with the Mormon church. In 1999 The LDS Foundation, a charitable organization sponsored by the church, approved a $25,000 grant to cover the cost of building a dome for the temple, making the Hare Krishnas the first non-Christian group to receive a contribution.

Charu is keen to use technology to reach the congregation. The couple broadcasted Krishna music and live spiritual radio programs out of Los Angeles in the late 70s and continued to run a local radio station when they came to Utah. Switching to the Internet six years ago, KHQN is a popular web radio station and reaches an international audience. UtahKrishnas.com is one of the most frequented websites related to Krishna consciousness, attracting a thousand visitors a day. Using Skype, Twitter, and other web communication tools, Charu has a long-term strategy to expand the temple’s influence and accessibility beyond Spanish Fork to reach worldwide congregational members who will call the Utah Krishna temple home.

Charu’s approach to speaking the Krishna conscious philosophy is practical and down-to-earth: He uses PowerPoint presentations to persuade the audience of the applicability of Krishna’s teaching to daily life and its problems.

“Srila Prabhupada stressed that Krishna consciousness is natural and innate, and I’ve always been convinced we’ve got a wonderful product to offer,” said Charu. “Anyone who’s focused can do what we’ve done; it hasn’t been difficult. The successes are the fruit of not being distracted.”

Charu and Vaibhavi speak fondly of the “miracles” that they’ve seen Krishna perform in reciprocation with their determined efforts to carry on the sankirtana mission.

“We’ve never had our own bank account, and nothing belongs to us. Krishna maintains those who preach,” Charu remarked. “Devotees can go to a college town, set up a storefront with an apartment overhead, and hold programs in the evenings. Preaching is so satisfying. We’ve simply tried to be resolute in Krishna consciousness, as Krishna prescribes in the Bhagavad-gita.”

Devotees who follow the example of this dedicated couple can be assured of receiving blessings, seeing miracles, and savoring the taste that comes with satisfying Srila Prabhupada and the previous acharyas.

By Amrita Gopala Dasi for Back to Godhead magazine.