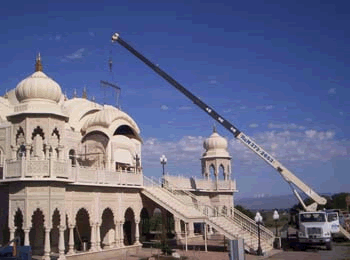 Situated on an elevated 15 acre plot in rural Utah, this 50′ high temple will be modeled after a famous devotional palace in India called Kusum Sarovar (temple on a lake of flowers). It will have a main dome 25′ in diameter surrounded by 12 other domes. There will be 108 arches and columns, sculptures, and murals, as well as open patios, colonnades, gardens, fountains and an outdoor stage and amphitheater that will accommodate crowds of up to 5,000 at a time.

The main temple shrine will feature exquisite black teakwood and gold leafed altars from India, and marble deities carved from the quarries in Jaipur. Vaibhavi Devi, the designer, says, “with its lofty domes, elaborately designed arches and columns, and architectural style of traditional India, this will be one of the most beautiful buildings in all of America.” Her husband, Caru Das adds, “half of the beauty of the building will lie in the magnificence of its setting, high on a hilltop, with a commanding view of South Utah valley, panoramic mountain vistas on all sides, and yet clearly visible from Interstate 15.”

Deities worshipped in the present temple will be transferred to the new facility when complete. These Deities are Jagannatha, Sita Ram, Laksmana Hanuman, and Gopal Krishna. As reported by Sheila Sanchez in Provo’s Daily Herald, the groundbreaking ceremonies for the new temple took place on Nov. 10, 1996. 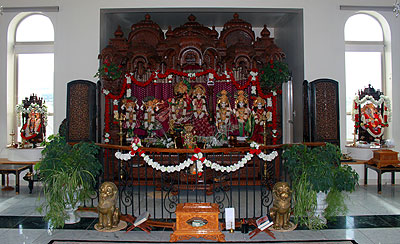 “Right before sunset, Caru Das and six male temple project trustees gathered under a colorful tent on top of the hill to acknowledge Ganesh for good luck, offer the Earth milk in symbolism of her sustaining nature, and other things by way of apology for piercing her breast with iron instruments. They also installed at the bottom of the hole a silver Ananta Sesha deity-the many hooded serpent believed to hold the planets in orbit. The crowd of 200 friends and devotees recited the “Brahma Samhita,” A poem composed by Lord Brahma, believed to be the creator of the universe…Around Ananta Sesha, devotees deposited five kinds of grains, jewels, metals, vegetables, fruits, leaves, drinks and flowers to create an atmosphere of auspiciousness for the future building… Construction of the 12,000 sq. ft. facility is expected to begin in 1997.”

A staff writer for the India Post wrote, “The fast growing Indian American population in Utah felt the need for a temple to bring the community together on special occasions and their plans and dreams for a Hindu temple are now on their way to becoming a reality. Groundbreaking ceremonies at the Sri Sri Radha Krishna Temple in Spanish Fork took place, November 10. When construction is completed, it is bound to be one of the most beautiful buildings in America.” 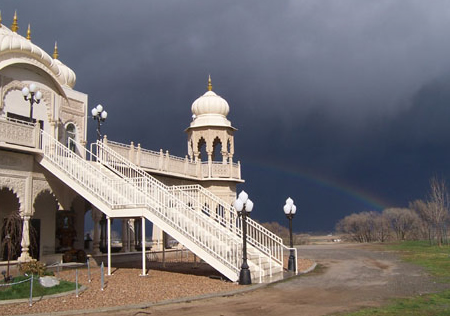 Special benefactors to the cause have thus far have been Dr. Dinesh & Kalpana Patel, Amala Bhakta das, Suresh & Nalini Bhatti, Bittu Khandpur, Yogesh & Pragna Shah, Ramesh & Suman Shah, Drs. Jaya Prakash & Sathya Reddy, Dain Bosworth Corp., Norbert Dupuis, Asim & Sujata Mukherjee, and Roshan and Kulwant Khandpur. All donors will be kept up to date through newsletters, web site, and personal letters. When completed the temple will have a “wall of honor” with the names of special benefactors. Krishna temple Project is a 501(c)3 charitable and religious corporation to which contributions are tax deductible. The tax exemption number is 74-2683775.

From a Press Release written in 1996