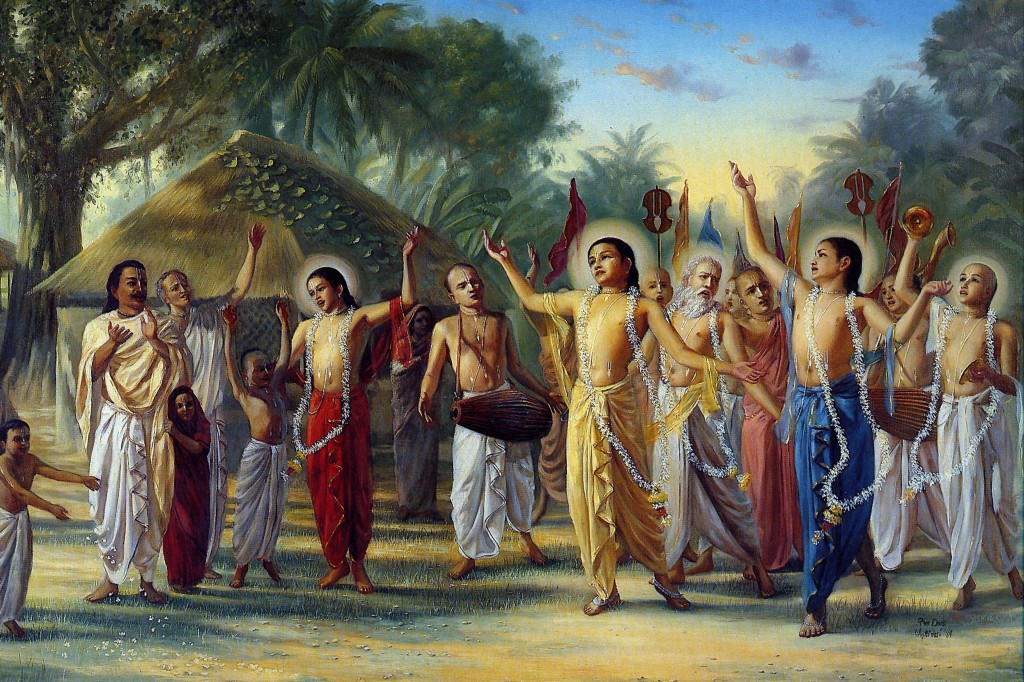 Gaura Purnima is a Gaudiya Vaishanva festival that celebrates the divine appearance of Lord Caitanya Mahaprabhu in Navadwipa, India. Gaura Purnima means “Golden Full Moon”. The name signifies that Lord Caitanya took birth at time of full moon and He blesses everyone with the moonlike rays of His teachings.

Devotees across the world celebrate Gaura Purnima by fasting till dusk, chanting the Holy Name of Lord Krishna, performing abhishek of Lord Caitanya and offering a variety of foodstuff to the Lord.

“Caitanya Mahaprabhu was born in Mayapur in the town of Nadia just after sunset on the evening of the 23rd Phalguna (1407 Sakadba), answering to the 18th of February 1486 of the Christian Era. The moon was eclipsed at the time of His birth, and the people of Nadia were then engaged, as was usual on such occasions, in bathing in the Bhagirathi with loud cheers of Haribol. His father, Jagannatha Misra, a poor ‘brahmana’ of the Vedic order, and His mother, Saci-devi, a model good woman, both descended from ‘brahmana’ stock originally residing in Sylhet. Mahaprabhu was a beautiful child, and the ladies of the town came to see Him with presents. His mother’s father, Pandita Nilambara Cakravarti, a renowned astrologer, foretold that the child would be a great personage in time; and he, therefore, gave him the name Visvambhara. The ladies of the neighbourhood styled him Gaurahari on account of His golden complexion, and His mother called Him Nimai on account of the ‘nimba’ tree near which He was born. Beautiful as the lad was, everyone heartily loved to see Him every day. As He grew up He became a whimsical and frolicsome lad. After His fifth year, He was admitted into a pathasala where He picked up Bengali in a very short time.” Srila Bhaktivinoda Thakur