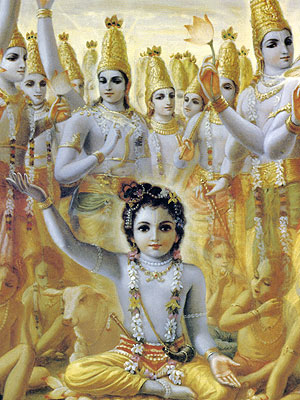 The personhood of Krishna is not an idea invented by human beings naively creating a God in their own image. Nor is personhood a limiting concept when applied to God, or the Absolute Truth. As the source of everything, Krishna naturally has His own personal identity, just as each of us does. The Vedas define God as the one supreme conscious being among all other conscious beings. He is infinite, we are finite, and He maintains us all.

Naturally, the best way to understand God is to learn from Him. In the Bhagavad-gita (“The Song of God”), Lord Krishna—a real, transcendental person—tells us that He is God and reveals many things about Himself.

“Unintelligent men, who do not know Me perfectly, think that I, the Supreme Personality of Godhead, Krishna, was impersonal before and have now assumed this personality. Due to their small fund of knowledge, they do not know My higher nature, which is imperishable and supreme.”—Sri Krishna, Bhagavad-gita 7.24

A Complete Conception of God

Many people have a hard time conceiving that God can be an actual person. But the Vedas tell us that God’s unique personal identity is His highest aspect. Here’s an analogy to show how God has three main features.

Looking at a mountain from a distance, we can make out only its size and shape. This is compared to comprehending God only as Brahman, His impersonal energy, which emanates from Him just as light shines out from its source.

As we move closer, we’ll start to make out more of the mountain’s characteristics—the colors of its foliage, for example. This is compared to understanding that God is within our hearts as Paramatma, or the Supersoul.

Finally, when we arrive at the mountain we can explore its soil, vegetation, animals, rivers, and so on. This is compared to understanding God the person, or Bhagavan.

Bhagavan is the source of Brahman and Paramatma and is therefore, in a sense, one with them. In the Srimad-Bhagavatam, Brahman, Paramatma, and Bhagavan are called the three phases of the Absolute Truth.

The word “Brahman,” or simply “Brahma,” is used in a generic sense to mean spirit. God, the individual souls, and the spiritual effulgence of God are all referred to as Brahman (its Sanskrit root means “the greatest”).

When the word is used in the context of Brahman, Paramatma, and Bhagavan—the three phases of the Absolute Truth—it refers to the impersonal effulgence of God (Bhagavan). Brahman is also called the brahma-jyoti, or “spiritual light.” It is fills the spiritual world and, when transformed by God, becomes the primordial elements of the material world. Thus it is said to pervade everything.

The Absolute Truth exists in three phases: Brahman, Paramatama, and Bhagavan. Paramatma is God’s expansion as the Supersoul within our heart.

The Vedic sages distinguish between the Supersoul and the small individual soul. Both reside within the heart, but one is infinite, the other infinitesimal. The soul, the tiny spark of consciousness within, is our true self—eternal, blissful, and wise. But it is small, and so it may get lost in illusion and entangled in material life.

But the Supersoul, great and infinite, is ever beyond illusion.

Bhaga means “opulence” or “assets,” and van means “one who possesses.” Because God owns everything, He is called Bhagavan. The Vedic sage Parashara has defined Bhagavan as the one who possesses in full these assets: beauty, wealth, fame, strength, knowledge, and renunciation.

God, in His personal feature, has all the attributes found in other living beings—but His are all infinite, unlimited, unrestricted by the conditions of matter. That Supreme, the Personality of Godhead, Krishna, exists in His own realm, beyond all dualities and illusions.

Localized Paramatma and all-pervading Brahman are features of the original personality, Bhagavan.

Listen to Prabhupada explain Personalism and Impersonalism in this video.