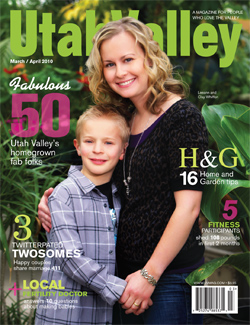 Caru Das was named with 49 others in the March 2010 issue of Utah Valley Magazine.

Fabulousness is cropping up all over Utah Valley. We’ve got do-gooders who remain down-to-earth, innovators who thrive by going against the grain, and great minds gaining ground in their fields. And the best part of all? Our 50 most fabulous people are all homegrown — they live and work locally, blooming where they’ve been planted. Read on for a look at 50 of Utah Valley’s most fabulous people.

Whether it’s culture, cuisine, art, architecture, animals, festivals, yoga or philosophy, the Sri Sri Radha Krishna Temple in Spanish Fork has something for everyone.

“Between tours, festivals, shoppers, diners, yoga classes and retreats, there are about 50,000 visitors annually,” says Caru Das, the temple’s president.

And that doesn’t count the visitors who use the temple’s offerings virtually.

“Our lives have been enriched by exposure to the Krishna Conscious lifestyle,” Caru says. “We wanted to use the most up-to-date technology to pass it on.”

That technology now includes Facebook (Caru has more than 1,700 friends), daily Tweets, multiple blog posts each week, a YouTube channel with close to 100 videos, and temple webcams for devotees who want to see the altar. In less than three months, the temple’s iTunes channel has seen 1,100 downloads of its Sunday lectures.

“A lot more interested people have been orbiting around the temple, both physically and in cyber space,” Caru says.