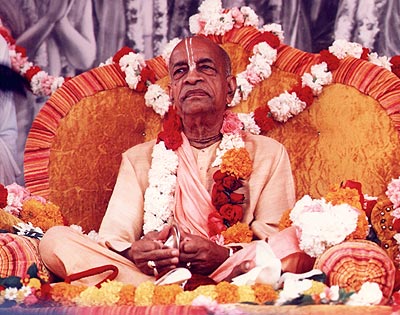 Srila Prabhupada took birth in this world on the day after Krishna’s Appearance day, in Calcutta, 1896. His life history from his earliest days to his passing away in 1977 is vividly described in his authorized biography, the Srila Prabhupada Lilamrta.

In Calcutta, 1922, Srila Prabhupada first met his spiritual master, Srila Bhaktisiddhanta Sarasvati Thakur, who immediately asked him, “You are an intelligent young man. Why don’t you preach the message of Lord Caitanya in English?” This request was to be the driving force in Srila Prabhupada’s life.

Although Srila Prabhupada then accepted his spiritual master within his heart, it wasn’t until 1932 that he became Srila Bhaktisiddhanta’s officially initiated disciple. Meanwhile, Srila Prabhupada had started a successful pharmaceutical business to maintain his family.

In 1936, Srila Prabhupada wrote to his spiritual master, who was then passing his last days on the planet. In the letter Prabhupada asked, “Is there any particular service I can do?” Srila Bhaktisiddhanta said in his reply, “I am fully confident that you can explain in English our thoughts and arguments. …I have every hope that you can turn yourself into a very good English preacher.” Srila Prabhupada recognized this as his life’s mission, and began to prepare.

In 1944, during the Second World War, when paper was scarce and people were not very wealthy materially or spiritually, Srila Prabhupada began his magazine, Back to Godhead, which is still being published today. To pay for the printing, he would collect donations. To publish the issues (then in 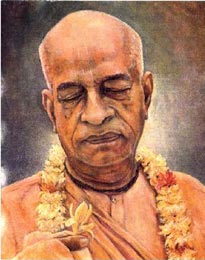 newspaper format), he would write, edit, and do the layout. To sell them, he would go out himself.

In 1950, he left his home and family and dedicated his life to preaching. In 1959, he took the order of sannyasa — full renunciation from material life. Soon afterward he wrote three volumes of the Srimad-Bhagavatam, finishing the first of twelve cantos. Again he wrote, edited, proofread, bought the paper, and got the books printed and bound. After delivery, he sold the books through bookstores and agents in the larger cities of India.

Now he had these three books in English. Feeling the weight of his spiritual master’s order and aware of Lord Caitanya Mahaprabhu’s prediction that His holy name would be heard in every town and village throughout the world, Srila Prabhupada was determined to go to America somehow or other and preach. He was convinced that if the Americans would take up Krishna consciousness, all the other countries in the world would follow.

Begging passage on the Jaladuta, a cargo carrier of the Scindia Steamship Corporation, and traveling 35 painful days across the ocean (he had two heart attacks on the journey), Srila Prabhupada arrived in New York City. He later related, “I didn’t know where to turn, left or right.” After a difficult six months, living here and there, he rented a small storefront on 26 Second Avenue in New York’s Lower East Side, not the best neighborhood by any estimation. It was here that some sincere searchers for spiritual knowledge gathered and gradually found shelter at the lotus feet of Srila Prabhupada, whom they affectionately called, “Swamiji.”

Soon Srila Prabhupada gathered the most interested of these searchers and brought them to Tompkins Square Park, where they held the first outdoor chanting session (sankirtan) outside India. Onlookers were amazed, as the boys who had gone with him were feeling the ecstasy of chanting. Soon there were regular chanting parties, and the first devotees became initiated by Srila Prabhupada. In July of 1966, Srila Prabhupada officially incorporated The International Society for Krishna Consciousness (ISKCON) and began to develop his infrastructure for spreading the message of Krishna throughout the world. Srila Prabhupada revived his Back to Godhead magazine, which the newly-initiated devotees distributed on the streets. 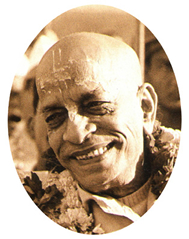 groups of people who frequented his storefront. Always he would distribute prasadam, and soon he started the first Sunday feasts.

After the New York devotees became more steady in their spiritual practice, Srila Prabhupada went to San Francisco to establish ISKCON on the West Coast of the USA. Many hippies joined his movement and spread spiritual love and peace throughout the community. Srila Prabhupada sent his disciples to preach in other parts of the world and establish Krishna Conscious centers. They first started preaching in London, then later in Berlin, India, and many cities throughout the USA.

Srila Prabhupada passed away from this world in 1977. After preaching for 11 years in the West, he had created 108 centers worldwide, written 51 volumes of transcendental literature (described below), traveled around the world eight times and initiated 5,000 disciples. He had created the world’s largest publisher of Vedic literature The Bhaktivedanta Book Trust, a scientific preaching academy The Bhaktivedanta Institute, and many other trusts to insure the continuity of ISKCON.

The Books of Srila Prabhupada

Srila Prabhupada wrote over 50 volumes of transcendental literature. From original Sanskrit or Bengali texts, he would write word-for-word complete translations for each verse and comment on the text in his famous Bhaktivedanta purports. He called these purports “my emotional ecstasies.” In clear and lucid language, he exposed the foolishness of the modern materialistic society. But merely exposing the modern society was not his main purpose. He sincerely wished the best for all living entities. Therefore he presented the vast science of spiritual knowledge in such a manner that even any slightly intelligent person could understand the truth: We are eternally parts of Krishna; we are His eternal servants.

Srila Prabhupada’s works include the Bhagavad-gita As It Is, Srimad Bhagavatam (12 Cantos), Caitanya-caritamrta (17 volumes), The Nectar of Devotion, Krishna, the Supreme Personality of Godhead, Teachings of Lord Caitanya, The Teachings of Lord Kapila, The Teaching of Queen Kunti, Sri Isopanisad, The Nectar of Instruction, and dozens of smaller books.

Srila Prabhupada produced these books (excepting the original First Canto Bhagavatam) within a short span of 11 years, a superhuman feat unmatched in recorded history. Every day he would dictate the text, and later his devoted followers would type his recorded voice and edit the copies. Prabhupada slept only 3 hours a day and ate only a handful of food. The early morning hours, between 1:30 and 4:30 a.m., he would spend writing, and later in the day he would preach to all classes of people in public and in private. Even up to the day before his death, when his physical body was at its end, he was writing the final purports to his last book. By any calculation, he was an extraordinary spiritual luminary.

Posted in Our Spiritual Teacher.