By Deena Bandhu Das
After the talks, the senior devotees and dignitaries were taken on a tour of the facility. Everyone marveled at how nicely everything had been made, with many large windows overlooking the Vrindavan gardens and trees. 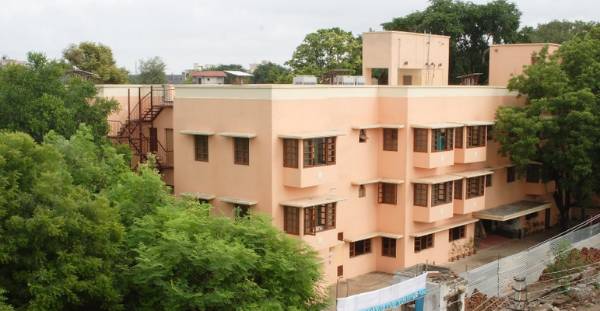 In the 1990s, a famous artist from South Africa, Arca Vigraha Devi Dasi, a disciple of Giriraj Swami, built a house in Vrindavan to do her artwork. But soon thereafter she discovered that she had cancer, which proved to be terminal. Beside Maharaja, many other senior devotees, such as B. B. Govinda Swami, Bhurijana Prabhu, Kesava Bharati das Goswami, Sivarama Swami, and Tamal Krishna Goswami, used to visit her and give her their association and encouragement in her last days.

Mother Arca Vigraha felt fortunate to have a house in Vrindavan where these devotees could come and assist her, and she wanted other devotees to have the same opportunity. So she expressed her desire to Giriraj Swami, that a “Back-to-Godhead Clinic” be created in Vrindavan where devotees could leave their bodies in a sublime spiritual atmosphere, supported by competent medical care. Maharaja took this request to heart and gradually evolved the idea of developing a hospice in Vrindavan for this purpose.

The first big challenge was to get land near the Krishna-Balaram temple. The price of land near the temple had skyrocketed, but more affordable land would have taken the project far away from the temple, which would not have been ideal. Then Abhirama Prabhu mentioned to Maharaja that the ISKCON Foundation Trust had purchased some land near the old Krishna-Balaram tree on the Parikrama Marg to be made into a park but that somehow not much progress had been made. So Abhirama discussed with the other donors, and they all agreed that the land would be suitably used in service to Srila Prabhupada’s followers, provided that the hospice was built in such a way as to preserve the trees. And so a very wonderful site was found.

Later, Giriraj Swami presented the project to Radhanath Swami and leaders of Bhaktivedanta Hospital in Bombay, and they also jumped at the chance to serve the Vaisnavas in this most significant way. Meanwhile, Giriraj Swami, along with Sangita Dasi, the foremost authority in ISKCON on hospice care, found a most excellent facility in San Diego upon which to model the project.

Despite many obstacles and delays, finally the hospice was becoming a reality. Some friends suggested that besides caring for ISKCON devotees, the team should create a facility for the local Brijbasis, and even before the hospice was built, a temporary facility was established not far from the temple in a rented building. Free treatment of Brijbasis began under the name of Vrindavan Institute of Palliative Care (VIPC), and almost a thousand patients, both in- and out-patients, were treated in the twenty-eight months that it was running before the permanent hospice building was ready!

Finally, on 26 August 2010, two days after the appearance day of Lord Balarama, who gives spiritual strength, Bhaktivedanta Hospice was inaugurated. Finally the Back-to-Godhead Clinic, the dream of Mother Arca Vigraha, had been realized. Despite his frail health, Giriraj Swami arrived in Vrindavan to oversee the opening. At the ceremony, His Divine Grace Srila Prabhupada was present in his beautiful deity form, sitting on an ornately carved wood Vyasanana—the first thing one sees upon entering the hospice. And inauguration was graced by many sannyasis and senior devotees, including Gopal Krishna Goswami, Brahmananda Prabhu, Bhakti Brihat Bhagavata Swami, Prabodhananda Sarasvati Swami, Abhirama Prabhu, Deena Bandhu Prabhu, Narataki Mataji (who will be serving in the hospice), Daivishakti Mataji, and many others.

Then Sri Padmanabha Goswami spoke. He mentioned that the land on which the hospice was built had been considered the most beautiful in Vrindavan and that three generations of his ancestors, who had had relations with Srila Bhaktivinoda Thakura and Srila Bhaktisiddhanta Sarasvati, used to do bhajana there amidst the peacocks and parrots and tamal and kadamba trees. He added that he had even seen His Divine Grace Srila Prabhupada here, chanting japa with his disciples. And so this place was auspicious not only because it was in Sri Vrindavan Dhama, the holiest of places, but also because it had been blessed by the presence of so many holy men, who had chanted the holy names here. This was truly the place for leaving this world! He also expressed his happiness that the devotees had taken care to build the hospice in such a way that all the trees were preserved, because that had been a condition when he and his family, from the Radha-Ramana temple, had sold the plot to ISKCON.

After the talks, the senior devotees and dignitaries were taken on a tour of the facility. Everyone marveled at how nicely everything had been made, with many large windows overlooking the Vrindavan gardens and trees. On the second floor they saw where the Brijbasis were being taken care of, and they gave them their association and blessings. Then a wonderful feast was served to all.
Abhirama Prabhu, who has been involved in resort development and management, quipped, “This is ‘The Last Resort’—when you want to get away from it all!”