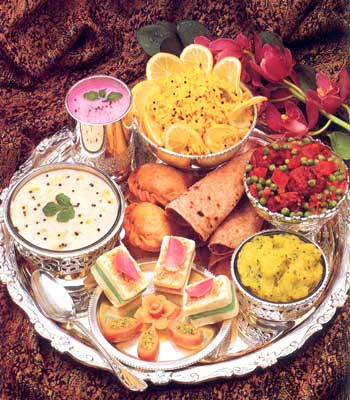 All food when it is prepared is consider bhoga or material food.  We then take a small portion of that and offer it to Krishna in a brief ceremony.  Krishna accepts this offering by ‘consuming’ it on the spiritual plane, and the physical remnants of the offering are called prasadam, or food blessed for our use.  When this portion is taken from the altar, the entire amount in the pots also becomes prasadam and is ready to be served to devotees.

When the food we consume is blessed by Krishna, it increases our devotion by bringing His purifying energies directly into body and mind.

We are karmically liable for the food we eat.  Even vegetarians have to kill some living entities in order to survive.  While there is karma (consequence to the soul) to the taking of life, there is far greater consequence to taking the life of a sentient being such as a cow, pig or chicken.  We can debate whether a carrot feels pain when it is pulled, but there are abundant scriptural references telling us to minimize the pain our diet causes by eating low on the ecological food chain by avoiding the killing of animals.  Add to that the fact that most meat is obtained from commercially-farmed animals who are forced into a lifetime of misery in horrible conditions, then are brutally killed — and it becomes clear that eating meat adds considerably to the world’s suffering.  Now many people are learning about the immense waste of water, edible crops and acreage required for meat production.  In a world where millions of people are starving, does it still make sense to devote the tremendous resources necessary to instead feed desires for meat consumption?  To do so is arguably unethical, but it certainly adds a heavy karmic debt to the person who does.

To lighten our impact on the earth and its creatures lightens our karmic load.  It’s important we reduce or eliminate any negative impacts on other living entities (including the earth) to reduce the our own karmic debts.  An important place to start is with a vegetarian diet.