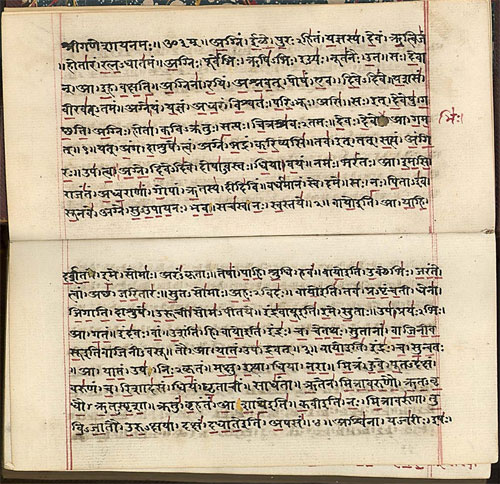 The Vedic scriptures are the spiritual literature of the ancient Indian culture, written in the Sanskrit language. They are comprised of a huge collection of books which include material (mundane), religious (ritualistic) as well as spiritual (monotheistic) knowledge. The expression “Vedic” is derived from the Sanskrit word VEDA, which means knowledge or revelation. According to the Vedic history, they were written down thousands of years ago. The date, however, is not very important because, without a doubt, the knowledge contained in these scriptures was existing a long time before it was written down.

The Veda may be understood by simply accepting what the Veda says about itself. Since the Vedic self-understanding may be amazing or even unbelievable to the modern reader, it seems important to dedicate a few sentences to the clarification of probable misunderstandings. The different opinions about the origin and history of the Vedic scriptures are due to the fundamental difference of world-views between the followers of the Veda and modern mundane scholars.

According to the indological world-view, such a thing as “Vedic scripture” doesn’t even exist. The collection of books mentioned in the beginning of this article is not a consistent body of knowledge—modern Indology says—but a mere accumulation of texts from different sources, written over a long period of time, starting about 1000 or 1500 B.C., after the hypothetical Aryan invasion into the Indian Subcontinent. Only then, a “Vedic” culture was formed through the mixture of tribes. If we believe this scenario, then it is natural to think that the Indian scriptures are nothing but a mass of unsystematic mythological texts.

Needless to say that the Vedic scriptures themselves maintain a completely different version. They refer to very ancient cultures, timeless revelations and divine incarnations. They also say that the entire body of Vedic knowledge has a systematic structure and a clearly defined goal, being compiled by the great Vedic Rishis (seers and sages), headed by Vyasadeva, about five thousand years ago. This knowledge was then systematically put into a written form in order to prevent it from being lost during in the upcoming age, which was foreseen as the Kali-yuga, the Iron Age, the most fallen in the cycle of ages.

The structure of the Vedic scriptures can be compared to a staircase with many steps, with specific scriptures corresponding to each step. The Vedic scriptures describe both the goal and the steps leading up to this goal. They are non-sectarian because they respect people of all “steps”; they simply encourage everyone to progress up to the next step. There is no question of converting or pushing, because everyone has to walk for himself. Or, as the Vedic saying goes, “Even in a flock of birds, each bird has to fly for itself.”

The individual evolution is not limited to one single life. The Vedic understanding is based on the concept of reincarnation, which declares that the steps of this symbolical staircase can also be understood as lifetimes. In other words, the almost proverbial “Hindu” tolerance is originally based on a solid philosophical understanding and shouldn’t be confused with the attitudes of merging, indifference, or “Everything is one.”

From a superficial point of view, the Vedic scriptures may appear to be unsystematic and even contradictory, but this impression can easily be reconciled by finding out how each step is connected with the goal.

The four Vedas: The scriptures of this category are generally labeled as the original Vedic scriptures. These four Vedas are known as Rig, Yajur, Sama and Atharva. Rig means ritual, and it contains mainly hymns and prayers (Mantras) in the worship of the universal forces called the demigods. Yajur means ceremony, and it mainly describes how to perform the rituals. Sama means singing; the scriptures of these categories contain many other mantras as well as strict rules how to chant these mantras according to mystic vibrations. Atharva means a priest who knows the secret lore; these scriptures describe many different kinds of worship and invocations. In a broader sense, many other scriptures of material knowledge are also counted in the Atharva, like the Ayurveda (pharmacological sciences and the means to maintain health.)

All of these teachings are supposed to encourage a human being to understand that he is not an independent entity, rather he is a part of a universal body, depending on many higher forces. The most important lesson of these four Vedas is to learn that everyone has to accept higher authorities. If you link up with these divine forces through the proper form and contents (ritual and understanding), then you will profit materially and experience some peace and harmony.

Tantric scriptures: Not everyone is inclined to follow the methods of the Vedas which demand strictness, purity, faith and patience. Impatient, ignorant people demand results on the spot, and these can be obtained by magic, ghost worship, etc. By providing such knowledge, the Vedic scriptures encourage the faith of such occult people so that one day, or lifetime, they may develop interest in the higher aspects of the Veda. These literatures are within the modes of passion and ignorance.

The Upanishads: Woven into the four Vedas are different kinds of philosophical discussions, like the Aranyakas and Brahmanas. Most significant are the Upanishads (“sitting beneath,” i.e. knowledge obtained from a spiritual teacher). These texts indicate that all material forms are transient; they are temporary manifestations of an eternal energy, which in itself is beyond material duality. They indicate the oneness behind the variety and inspire people engaged in the rituals of the Vedas to go beyond their short-term goals.

Vedanta-sutra: 560 condensed aphorisms which define the Vedic truths in most general terms in order to provide a common ground of argument to all different kinds of philosophical schools. Therefore, the commentaries to the Vedanta-sutras are voluminous.

Itihasas: These are the historical works, mainly the Ramayana (the history of the incarnation Rama), the 18 Puranas and 18 Sub-Puranas (universal history of creation and annihilation, the incarnations and the great kings, saints and teachers), and the Mahabharata (the history of ancient India [called Bharata], leading up to the appearance of Krishna five thousand years ago). These scriptures are essential because they expand the understanding of the Absolute beyond the abstract, impersonal platform. The Absolute is supremely perfect and complete; that’s why it is both impersonal AND personal. Actually, the personal aspect is the original source of the secondary impersonal existence of the Lord, since an impersonal energy cannot be the source of persons. The Itihasas reveal this personal feature, gradually introducing and identifying it, culminating in the purely monotheistic revelations of Bhagavad-gita and Srimad-Bhagavatam.

Bhagavad-gita and Srimad-Bhagavatam: These sacred texts are designated even by the Vedic scriptures themselves as the most important, essential revelations. They directly describe the nature, energy and person of God, who is both the immanent (as Vishnu) and transcendent (as Krishna) source of everything, the cause of all causes, of both the impersonal and personal manifestations.Bhagavad-gita (“God’s Song”) is the words spoken BY God, and Srimad-Bhagavatam (“Divine Revelation”) is the words ABOUT God, spoken by the representatives of God.

This implicit structure of the Vedic scriptures sheds new light on the entire Vedic tradition and deserves closer examination. However, since these scriptures want to lead us to the supreme goal—God—it is not sufficient to merely study them theoretically. They imply practical consequences. Mere academic study of the Vedic scriptures can be compared to reading a cookbook or a musical composition. If we don’t come to the point of actually cooking or playing, we’ve missed the point.