By Vinod-bihari das
On 18 February 2011, the day after Sri Nityananda Prabhu´s appearance day the long awaited decision pertaining the appointment of land for a new temple in The Hague, The Netherlands, was made by the local Dutch governing authorities in favour of ISKCON and other religious organizations. 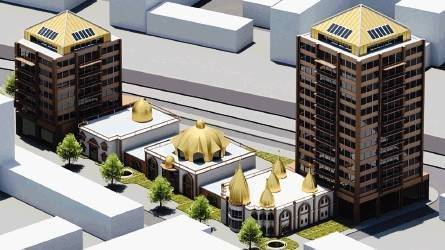 On 18 February 2011, the day after Sri Nityananda Prabhu´s appearance day the long awaited decision pertaining the appointment of land for a new temple in The Hague, The Netherlands, was made by the local Dutch governing authorities in favour of ISKCON and other religious organizations.

A consortium of three religious organisations, International Society for Krishna Consciousness, Arya Samaj Nederland and Siri Gurudwara Singh Sbha will be building three temples side by side. The temples are linked together and interspersed with two towers, each with 45 apartments.

This million euro project will be funded by the organizations with no financial aid from the government. Alderman Marnix Norder (city development, integration) released an official statement to the media where they stressed the fact that the financial funding will be a private endeavour and the municipality has only authorized and allotted the land for this project. He believes that this complex will be an icon for the city of The Hague and The Netherlands in general and will be the second largest temple complex in Europe, after the UK.

These temples will be a major tourist attraction with residential towers to facilitate not only Hindus, but everyone. The complex will have meditation facilities and guestrooms for (foreign) guests and visitors. Council member Rajesh Ramnewash launched this plan one and a half years ago. The complex should open in 2014.

This is a historical achievement for all of us, as we were joyfully glorifying Lord Nityananda for showering His mercy upon us, while reading a letter of Srila Prabhupada: “So far a Temple place is concerned, even there is no place, we can sit down underneath a tree and chant as I did in New York. Krsna will give a nice place” . A significant milestone.

After 20 years of preaching in various small buildings the Lord gives us the opportunity for a permanent place, where the Lord wants to reside with His consort. It gives all of the congregation members and devotees a new boost of inspiration. A boost in serving Lord Caitanya Mahaprabhu’s prediction pr. thivi-te a-che yata nagara-di gra-ma sarvatra praca-ra haibe mora na-ma. “In every town and village, the chanting of My name will be heard.”

The next phase of this project will be setting up a business case and presenting this to the government. The phases hereafter we will start with fundraising, PR and development. We are taking this opportunity very seriously and we ask for your blessings, support and guidance on this exciting and important endeavour for ISKCON The Hague. You can read the Dutch press release here: http://to.ly/9DlE (translated to English with Google Translate).

We will publish additional information on our website: http://www.gauranitai.nl. On behalf of Syamsundara das (temple chairman),