Here in Florida, we are blessed with the opportunity to experience Lord Jaganatha’s Rathayatra in more cities than anywhere else in North America. 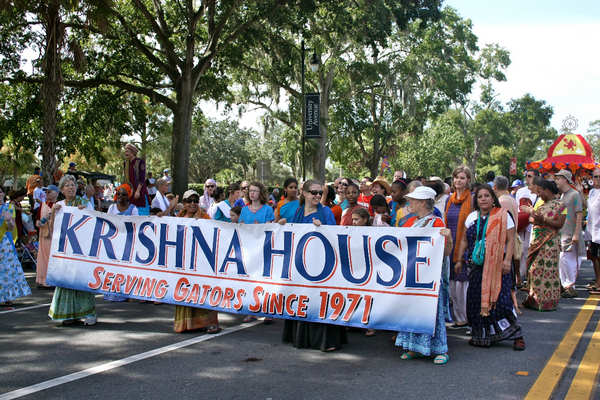 Here in Florida, we are blessed with the opportunity to experience Lord Jaganatha’s Rathayatra in more cities than anywhere else in North America. It comes as no surprise then, that the last in a line of ecstatic festivals, turned out to be, by all accounts unrivaled! This is none other than our Gainesville Rathayatra, which was held on Friday, October 16, 2009, as part of the University of Florida’s Homecoming Parade. Devotees took full advantage of having a captive audience of tens of thousands lining University Avenue as they loudly chanted, danced, waved and smiled their way past onlookers, giving everyone the chance to hear the Holy Name, and to see Lord Jagannatha, Lord Balarama and Lady Subhadra.

Because the Krishna Lunch program has been part of the University of Florida for over thirty-eight years, many students, as well as alumni of the University of Florida have very positive feelings toward the “Hare Krishnas.” Their delight was evident on their faces, as young and old alike spontaneously waved, clapped, and smiled at us. Ladies carrying a large banner with KRISHNA HOUSE (serving Gators since 1971) led our party, followed by rows of colorfully-dressed young ladies dancing in unison. The kirtan was surcharged with such energy that even the local TV news reporter commented by saying ours was the most “colorful and enthusiastic” group! Kalyapani das bravely donned stilts, giving lots of kids a treat, walking tall and merrily interacting with folks along the way.

The devotees from Krishna House had prepared a delicious feast, consisting of their famous pasta and curd vegetable, salad topped by their MAGIC dressing, bread and melt-in-the-mouth halava, which they so kindly served to exhausted participants at the end of our route. Though the weather had looked threatening before we began, however, in spite of the forecast of storms, we made it through the parade, and finished our prasadam JUST before the rains came! All glories to the many organizers and 120 + participants who made this Rathayatra such a great success.