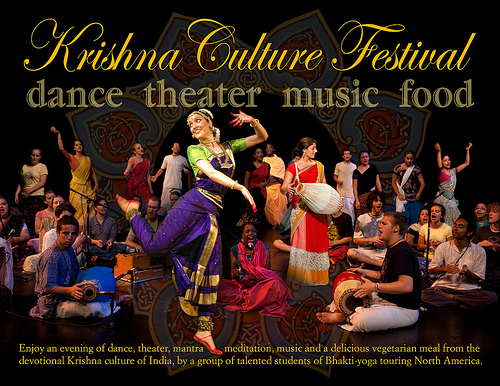 Youth will play a major part in no less than 34 festivals this year, the Tour’s sixteenth. Seven of these will be Ratha-Yatras— the cart festival in honor of Lord Jagannath originated in Puri, India—which the youth will set up and take down themselves and perform the entertainment for. The rest—cultural shows held at university auditoriums, theaters, temples, and yoga studios across the country—will be organized in full by the youth.

“Although we’ve visited yoga studios before during our winter tour in Mexico, this is the first time we will be doing so during our summer tour,” says organizer Manu Dasa. “As well as performing at studios in Texas, Ontario, Canada, and Denver, Colorado, we’ll also visit one in Helena, the capital of Montana, where there is no temple and most people have probably never even heard of Hare Krishnas. We try to reach out to new people unfamiliar with Krishna consciousness as much as possible.”

The Krishna Culture show is tailored to such an audience, featuring traditional Bharat Natyam dances, Bhagavad-gita based drama The Three Modes of Nature, and an audio visual presentation on sacred sound, followed by a guided mantra meditation intended to get people in the mood for kirtan. 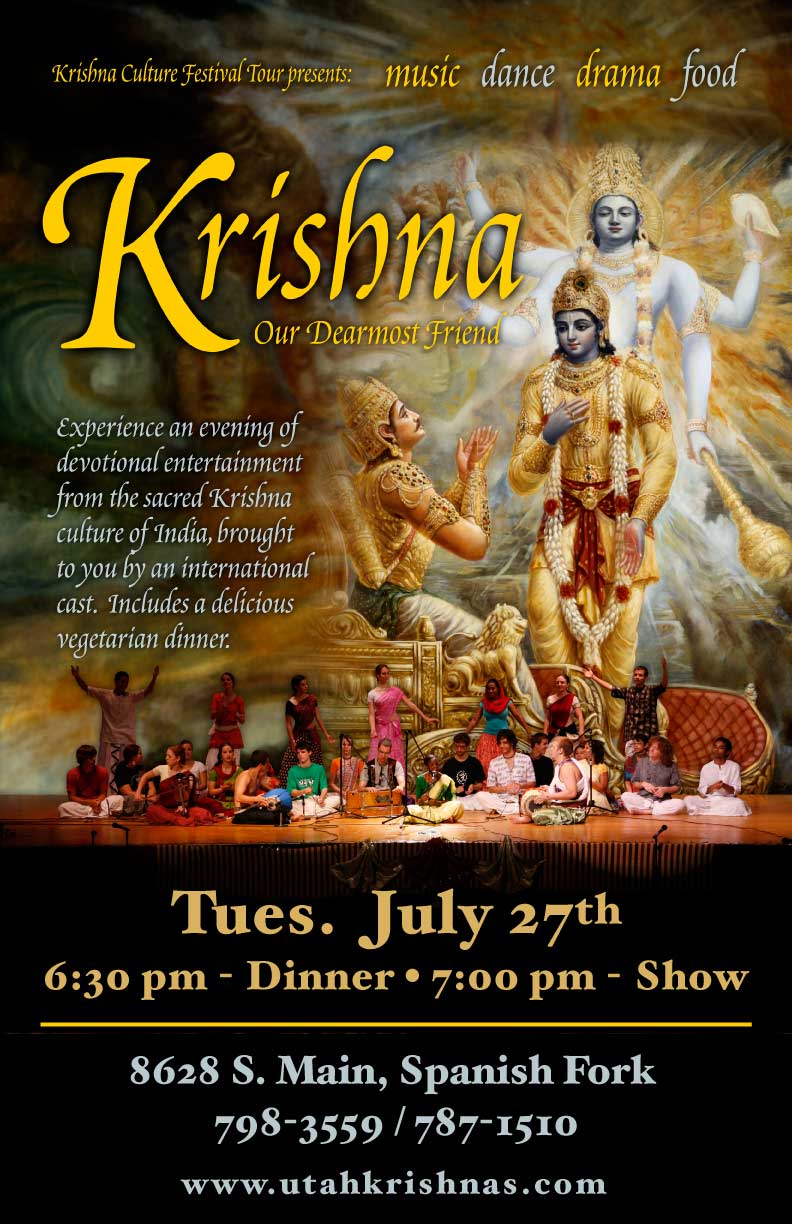 “By the end of our show, people are dancing and calling out to the Lord with their arms in the air,” Manu says. “Upon leaving the auditorium, they’re greeted by youth at our book table who present them with Srila Prabhupada’s books, which the show is based on. Next, they’re handed plates of sumptuous, healthy vegetarian food prepared by veteran ISKCON chef Apurva Dasa, who will be traveling with us throughout the tour.”

Every year, the response from audiences has been enthusiastic. “It blows their minds—it’s like nothing they’ve ever seen before,” says Manu. “They love the chanting, the uplifting energy, and our international cast. Usually because our show is about Indian culture they’re expecting Indian youth, but what they see is United Colors of the Spiritual World!”

It’s not just audiences that benefit spiritually. The tour will stop at every ISKCON temple along the way, with youth waking up to a different morning program at a different temple almost every day, and seeing the incredible variety of beautiful deities and temples across the country.

Tour participants will also associate with and render service to the devotees at each temple, gaining inspiration from the dedicated few who staff them (many temples in the US are run by only four devotees or less), as well as learning from senior devotees including Radhanatha Swami and ISKCON pioneer Yamuna Dasi.

Some senior devotees will also hop onto the bus with the youth for sections of the tour, including Jayadvaita Swami and Partha Sarathi Dasa, who served as a US sergeant in the Iraq war. An enthusiastic book distributor who had soldiers at his base holding morning programs and reading Srila Prabhupada’s books, he inspires youth to distribute books with him whenever he joins the tour.

Bhakti Marg Swami will also hop on board for a few days to fine tune the Krishna Culture show’s drama with his professional touch, while in California youth will attend a one week japa meditation retreat led by Giriraja Swami.

“Our motto is: Serve to Love, Love to Serve,” explains Manu. “We request everyone joining the tour to leave all material things behind, and to absorb themselves one hundred per cent in devotional service for two months. And hopefully they’ll come off the end of those two months with a feeling of intense spiritual high. I usually don’t like the word ‘retreat,’ because it means ‘going back’ in Latin. But in a way the bus tour is a retreat—we’re retreating from material life and advancing in spiritual life.”

Of course, the youth will also have plenty of good, clean, natural fun throughout the tour. They’ll swim in the Pacific Ocean, hike in the Canadian Rockies at Banff National Park, and see the Grand Canyon. They’ll camp at Gatineau National Park in Canada for three nights, canoeing, swimming in fresh water lakes, camping under the stars, and building giant bonfires at night. And they’ll take the perfect natural bath at Yellowstone National Park. “It’s a hotspot for volcanic activity, so there’s hot thermal pools and geysers everywhere,” Manu says. “There’s one place where a hot river flows into a cold river beneath a little waterfall—now that’s the perfect way to get clean in the morning!”

Participants in this year’s tour will also have a special privilege to look forward to—taking Krishna Culture’s brand new bus, Garuda 3, on its maiden voyage. Still under warranty, with only 4,000 miles on the clock, and a brand new engine and transmission, the MCI J4500 Greyhound-style bus is ready for adventure. It’s been optimized for motor-home conversion, and has better suspension and shock absorbers than its predecessor for a smoother, more comfortable ride. “We drive through the night often,” Manu says. “And with this bus, everyone will get a better night’s sleep.”

The front of the bus will have bunk beds for its drivers on one side, with a row of seats for those who want to chant in the early mornings without disturbing their tour mates on the other. There will also be a beautiful new altar custom-made by Akuti Dasi for the tour’s Gaura Nitai deities, behind which a door will open into the main cabin full of bunk beds that will fold up to become couches during the day.

“We’re now on our fourth bus conversion, so we’ve learned a lot,” Manu says. “This time around, we’ve made everything more roomy and comfortable. There’ll be individual reading lights and air conditioning for each bunk, cell-phone charging stations, and separate showers and toilets for the boys and girls. This bus will also be kitted out with a slightly larger kitchen than its predecessor, complete with a giant two-burner stove, kitchen counter, sink, and spice racks.”

And the results show that it’s worth it. “One tour alumni observed to us that the ‘bus tour generation’—or those who had gone on the tour year after year—were more connected to Krishna consciousness, their community, and their temple than other generations of ISKCON youth,” says Manu. “Every year, they come off the tour completely spiritually recharged and inspired, and then they inspire other youth at their temple or community. It’s a cycle of inspiration!”