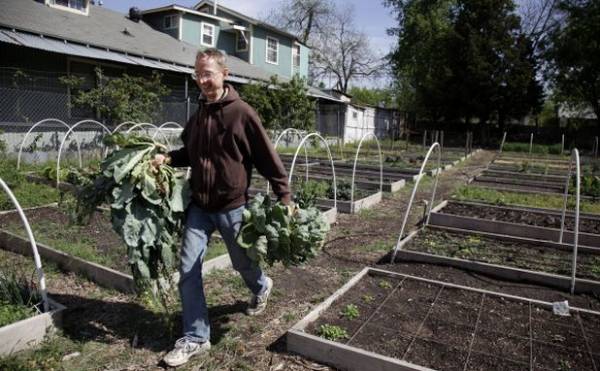 The smell of cinnamon wafts through the intersection of Gurley and Graham avenues in East Dallas.

It’s not the only thing emanating from Kalachandji’s Indian restaurant and its adjoining Hare Krishna temple, whose pristine grounds stand in stark contrast to the aging homes around it.

Things are starting to change in the Mount Auburn neighborhood — mostly at the hands of the Kalachandji’s community.

“The whole neighborhood was built by the Ford Company in the ’30s for their workers,” said Danny Thomas, manager of the restaurant. “They were cheap houses back then that were built without foundations. They sink into the ground.”

Members of the temple have begun moving into the surrounding houses, remodeling them and becoming active in neighborhood groups.

Dallas’ only Hare Krishna temple was founded in 1971 in a building that once housed Mount Auburn Christian Church. The restaurant opened a few years later with the goal of sharing a unique brand of vegetarianism with the Dallas community.

Forty years later, the temple boasts 3,000 members, minister Nityananda Chandra Das said. Worshippers are there seven times a day, seven days a week, and the most popular service on Sunday evening can draw 300.

In addition to fixing up the neighborhood, temple members recently started a community garden where the ruins of a burned-out building once stood. They cleared out concrete blocks and other debris and began to turn the soil.

The garden is the mission of a church member who goes by the spiritual name Shalagram. He presented the idea to the temple’s governing council, and it rents plots to residents regardless of their membership in the temple.

Shalagram had high hopes for the garden’s effect on the neighborhood from the beginning. He thought the right touch of green could brighten up the otherwise run-down area.

“Right across the street is a six- or eight-story red brick building that used to be a post office,” Shalagram said. “It’s now a halfway house. Next to that is liquor store; right next to that is a party hall.”

The improvements didn’t take effect immediately. At first, homeless people frequented the garden, and one of the initial gardeners had her first crop of beans stolen. But eventually, people started to take notice.

“Sometimes it’s hard to put a finger on exactly how these kinds of projects enliven communities and make them better places, but it really does happen,” Shalagram said. “The fact there is some nice greenery and community involvement in a therapeutic activity can work wonders.”

“I think it’s just something this area isn’t used to,” she said. “We’re out there all the time, and a constant positive presence can only help.” Shalagram said gardeners are asked to donate excess veggies to the restaurant, which in turn donates leftover food to the needy.

Dodson said she has been surprised at the success she’s had with her plot. “You just end up with so much,” she said. “Giving the rest to the restaurant was a great option for the extra food.”

Kalachandji’s donates leftovers, supplemented with beans and rice, to Metro Care Services to feed Dallas’ underprivileged. The food is all Indian vegetarian, which may not be what the recipients are used to — but Thomas said they always enjoy it.

“They are happy to get it. Not everyone appreciates vegetarianism, but a lot of times, they can’t even tell the difference,” he said. “We do some things with milk and soy, which really takes the place of meat, so we have a pretty good reception there.”

Kalachandji’s takes the business of food seriously. Members think that food is a way to reach out to the community, and all proceeds from the restaurant go to the temple.

One of the restaurant’s two chefs, Manjuami Devidasi, has worked at Kalachandji’s since 1995. She said that food can lead to spirituality. “Everybody has to eat, right? Food is everywhere, whether you are Christian or Muslim or Hindu or Hare Krishna,” said Devidasi, adorned in colorful saris and a bindi on her forehead. “We give more importance to food because food is a weakness to everybody.”

Thomas said the food is most effective because it’s all organic. What it doesn’t get from the community garden, it buys from the Dallas Farmers Market. Whatever’s fresh dictates what’s on the menu.

Devidasi said that this devotion to fresh food and Kalachandji’s dedication to serving the community keeps people coming back.

“We have customers that come here every day, and they’ve been coming here every day for the past 15 or 20 years,” she said. “They love what we do, and that’s what makes me really happy.”