by Norm Phelps
“After more than two decades of waiting for you to bring your personal regime into line with your public pronouncements—and the clear teachings of the Lord Buddha Shakyamuni in the Mahayana Scriptures—I have reluctantly concluded that you do, in fact, speak in soothing platitudes to people like me while continuing to eat the flesh of murdered mother beings, and that you have no intention of changing.”

Dear Sir: I am writing to you with great sadness. 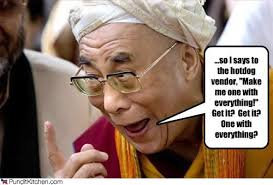 By way of introduction, or actually re-introduction, I am the author of The Great Compassion: Buddhism and Animal Rights, a copy of which I sent you soon after it came out in 2004, and an additional copy of which I am enclosing with the hard copy of this letter. I have been a practicing Tibetan Buddhist for more than twenty years.

You may also recall that in November 1998 you generously granted me a private audience in Washington, D.C. for the purpose of discussing a vegetarian diet as Buddhist practice. You were very gracious in providing me an opportunity to urge you to adopt a vegetarian diet on full-time basis. You told me that because of liver damage resulting from hepatitis B, your doctors had instructed you to eat meat, and that for some years you had compromised by eating vegetarian every other day. You spoke movingly of your deep compassion for animals and your desire that as many people as possible, including Tibetans and Buddhists, adopt a vegetarian diet as an expression of Buddhist compassion for all sentient beings.

Less than three weeks after this interview, Agence France Presse (AFP) reported that at a dinner at the Elysee Palace for Nobel Peace Prize laureates, you refused the vegetarian meal that you had been served with the comment, “I’m a Tibetan monk, not a vegetarian,” and insisted on being served the same entrée that the other guests were having, which was reported to be braised calf’s cheek and vol-au-vent stuffed with shrimp. I understood that the dinner might have been held on a meat-eating day of your one-day-meat, one-day-veggies regime, but I could not understand why you would publicly go out of your way to dissociate yourself from a compassionate vegetarian diet when just days earlier you had spoken to me with such apparent conviction about the need for “everyone who can” to become vegetarian. There were no reporters present at the dinner; the AFP reporter heard the story from you the next day, which suggests that you wanted the world to know that you were not vegetarian. In other words, quite inexplicably, you apparently wanted to promote meat eating as consistent with Buddhist practice. I wrote you asking about this, but received no response.

In light of this background, I was overjoyed to read in April 2005 that you had announced to a wildlife conference in New Delhi that you had lately adopted a vegetarian diet on a full-time basis. On February 16, 2007, Rinchen Dhondrup wrote a thank-you letter on your official letterhead to Ms. Dulce Clements of La Verne, California, who had sent you a copy of a wonderful book on vegetarianism as spiritual practice, The World Peace Diet by Will Tuttle, Ph.D. In this letter, Dhondrup-la said that “His Holiness the Dalai Lama’s kitchen here in Dharamsala is now vegetarian.”

Thus, as you may imagine, I was greatly dismayed to read an article from the Milwaukee Journal-Sentinel dated May 15, 2007, reporting that you had attended a fund-raising luncheon on May 3, in Madison, Wisconsin for the Deer Park Buddhist Center and Monastery. According to the article, the food served included veal roast, stuffed pheasant breast, and soup made with chicken stock. The chef told the reporter that you “chowed down” on everything you were served, including the veal. Veal calves are separated from their mothers just hours after birth, confined in tiny crates too small for them to turn around in, fed an iron deficient diet that gives them severe, painful, chronic anemia, and killed while they are still small children. When you ate the veal, you lent your public support to some of the most egregious cruelty that our society is capable of.

Someone who attended a public talk that you gave in Madison around this time reports that you mentioned the vegetarian issue, saying that you had been vegetarian for two years “because the big monasteries are becoming vegetarian,” but that you had gone back to meat eating because of your health. I presume that the two years were spring, 2005 to spring, 2007. I would have expected you, as a great bodhisattva, to follow a vegetarian diet because it is the compassionate thing to do and was taught by the Lord Buddha Shakyamuni, not because it is the popular thing to do in the context of monastic politics. Even more recently, it has been reported in the world press that on June 13, 2007 you visited a zoo created by the late television performer Steve Irwin in Beerwah, Australia. During this visit you reportedly spoke in support of a compassionate vegetarian diet while admitting that you eat meat “occasionally” for the sake of your health.

It is hard to understand how eating meat “occasionally” could benefit your health. It would seem reasonable that if your body did, in fact, require meat—which seems most unlikely—you would have to consume meat more often than “occasionally” for it to have any health effect.. And since it is easy in India and the West to eat a nutritious, high-protein diet without meat, perhaps supplemented by vitamin B12 tablets, I cannot help suspecting that this is more a question of appetite and custom than health.

It is also hard to understand why you would lend your support to a zoo, which is, after all, a prison in which animals innocent of causing any harm are incarcerated far from their natural surroundings to live out their lives in bleak, barren deprivation and hopelessness. It is especially difficult to understand why you would visit a zoo dedicated to the memory of Steve Irwin, who was world-famous for teasing and tormenting animals for the sake of television ratings, worldly fame, and money.

The lack of consistency between your public statements in support of vegetarianism and animal protection on the one hand and your personal behavior on the other is troubling, to say the least. I am afraid that it is now taken for granted in much of the Western animal protection community that you are a hypocrite who tells his audience what he believes they want to hear and then does whatever he wants to. Your moral inconsistency toward nonhuman animals has even given rise to a website called Bad Karma Lama, www.badkarmalama.com. I have no idea who created the site, but it reflects a view that is very widely held—and, I fear, with good reason. You cannot have it both ways. You cannot be seen as a protector of nonhuman animals and continue to eat meat and visit zoos. You cannot respect the Buddha nature of animals in your speech and continue to disrespect it in your conduct. That is, in fact, hypocrisy.

In The Great Compassion, I said that “Buddhism ought to be an animal rights religion par excellence” because of the Buddhadharma’s recognition that there is no intrinsic difference between humans and other animals and its insistence that the First Precept (“Do not kill.”) applies to our treatment of animals as well as our treatment of human beings. If Buddhism does not in actual practice always extend the full measure of its compassionate protection to animals, that is a failure of individual Buddhists, including I am afraid, far too many teachers; it is a violation of the teachings, not a consequence of them. The world sees you as the living embodiment of the Buddhadharma, and even those who are not Buddhist see you as a great moral leader. “Actions speak louder than words,” and when you eat meat, the public, Buddhist and non-Buddhist alike, takes that as proof that inflicting unspeakable suffering and premature death on sentient beings for the sake of appetite is morally acceptable. In that way, you contribute to the killing of the forty-eight billion land animals and uncounted billions of aquatic animals who are slaughtered every year for food.

After more than two decades of waiting for you to bring your personal regime into line with your public pronouncements—and the clear teachings of the Lord Buddha Shakyamuni in the Mahayana Scriptures—I have reluctantly concluded that you do, in fact, speak in soothing platitudes to people like me while continuing to eat the flesh of murdered mother beings, and that you have no intention of changing. I remain a firm practitioner of Tibetan Buddhism—you have broken my heart, but not my faith—but I no longer consider myself a follower of the Dalai Lama; and I will not consider myself one until your actions toward sentient beings in the animal realm reflect your teaching. I have reached this decision only after much soul-searching and with great reluctance. I am not going to ask you to change your behavior. I’ve been there, done that. We have a saying in America that “Anybody can talk the talk. What matters is do you walk the walk.” You can talk the talk with the best of them. But after twenty years, I can no longer pretend that everything is fine while I wait for you to walk the walk.