Srila Prabhupada wanted the whole world to learn about Mayapur. It is venerated as the birthplace of Lord Caitanya and it is the location of His Divine Grace’s Pushpa Samadhi. According to scripture, it is said that all the holy places reside in Mayapur and that to spend one night there is equivalent to spending three nights in any other holy place. 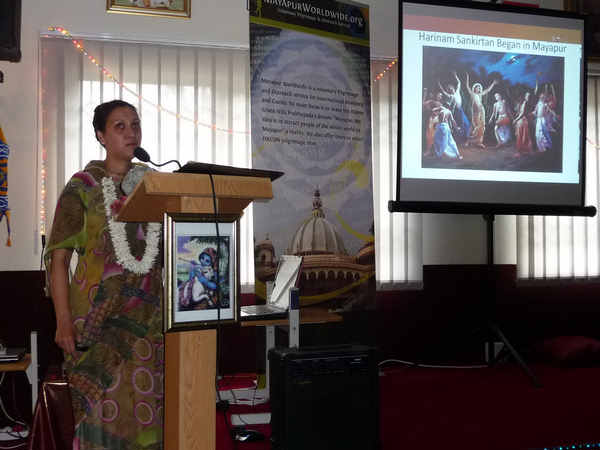 Srila Prabhupada wanted the whole world to learn about Mayapur. It is venerated as the birthplace of Lord Caitanya and it is the location of His Divine Grace’s Pushpa Samadhi. According to scripture, it is said that all the holy places reside in Mayapur and that to spend one night there is equivalent to spending three nights in any other holy place.
This fact makes it the most sacred of the holy places, but it is almost equally lesser known. Mayapur Worldwide was established under the auspices of ISKCON Mayapur to promote the holy dham internationally and make people aware of the glories of the holy dham. And in keeping with this mission, Sukanti Radha Devi Dasi, department head of Mayapur Worldwide, was in South Africa last month leading a campaign to spread the word about Mayapur under the nurturing supervision of HH Bhaktipurusottama Swami.
She was assisted in this campaign by the Vaishnava Research Forum at New Sri Mayapur Dham, Malvern which is affiliated to the ISKCON Sri Sri Radhanath Temple in Durban South Africa. A newly launched preaching centre for bringing in new devotees and guests to ISKCON. Sharing similar objectives, it was a dream team for the campaign.
A media campaign was launched to promote a multimedia presentation at the New Sri Dham centre about Mayapur, the services offered by Mayapur Worldwide, and the upcoming construction of the Temple of the Vedic planetarium. This campaign consisted of interviews on radio and with the news media. In the news articles Sukanti Radha presented Mayapur Dham as one of the holy places of pilgrimage and explained why it was worth being put on anyone’s travel itinerary. Tangible proof of the success of the articles was Sukanti Radha being recognized wherever she went, and having people come up to her asking to know more.
On her radio interview at Radio Hindvani, Sukanti Radha reached an audience of more than 90, 000 people. She talked about Mayapur and other places of pilgrimage, such as Vrindavan. Well travelled to many holy places in India and out of India for over 23 years she shared her experience to the wide audience. She explained why people should go on pilgrimage as well the preparations one should undergo before embarking on their journey. She explained the spiritual benefits of going to Mayapur and recounted many sweet leelas and evidence from the scriptures to prove the veracity of her statements. Equally important to convey was information about the facilities and activities available to pilgrims when they get to Mayapur, and many people were impressed at a level of development they had not expected. The upcoming presentation was advertised as a way to learn more. 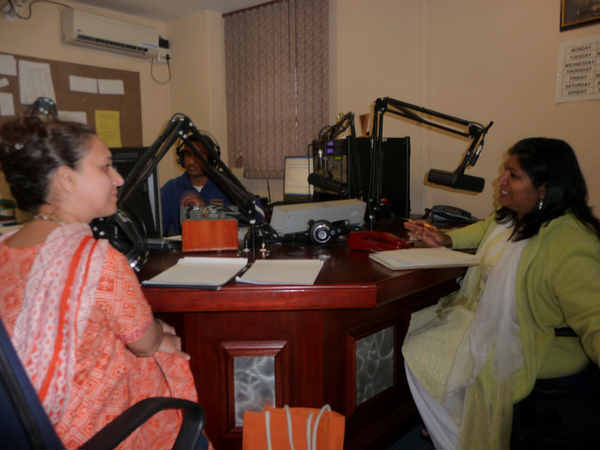 Lotus FM is a national radio station with a wider coverage than Radio Hindvani, and on her interview at this station Sukanti Radha was able to preach about Mayapur to an audience several hundred strong. It was broadcast during drive time, when people are returning home from work, maybe stuck in traffic, and so present a captive audience. She addressed the same questions as on Radio Hindvani and reminded everyone that if they wanted to know more, they could attend the upcoming presentation that Saturday. Indeed, the interview was found so captivating by one individual, that he actually pulled off the road until it was over so that he could give his full attention to it. We received more than one report of such an incident.
The climax of the campaign was the multimedia presentation held at New Sri Mayapur Dham in Malvern. The campaign of awareness conducted throughout the week had succeeded and the presentation was held to a rapt full house. She expanded on the questions she’d answered in the interviews, using pictures to convey what to expect in Mayapur, the people and the activities.
A ten minute video about the Temple of the Vedic Planetarium followed the general presentation on Mayapur. She addressed the most frequently asked questions about the project, explaining why the planetarium was being built, why in Mayapur, and the benefits it would bring in the short to long term. Mayapur Worldwide has been appointed by the Vedic Planetarium team to promote the project worldwide.
The presentation generated a great deal of enthusiasm and interest in those assembled at the prospect of visiting Mayapur. Some were devotees who had already been and had felt the spark rekindled in their hearts, eager to plan their trip back. And are now in correspondence with Sukanti Radha making plans to joining the upcoming tours. Others, who people who had never before heard of Mayapur but were keen to learn more about its significance and seriously entertained the possibility of going there.
Everyone who attended wanted to be kept informed about any and all news about Mayapur, the construction of the planetarium, and upcoming tours.
My gurumaharaj, HH Jayapataka Swami instructed us in a recent Damodar article that we should bring many new souls to ISKCON this month says Sukanti Radha.She explains, my godrothers and I from JPS Disciples UK decided we will bring 1008 new souls collectively in the UK, so when I was invited to conduct this campaign in South Africa I felt like I was deserting a group effort. I was sad. As I left the shores of London I prayed for an opportunity to assist my god brothers in this effort to reach our goal and fulfil our gurumaharaj’s instruction. When the RADIO station reported that we had 90,000 viewers and when I worked out that at my talk there were only a handful of devotees and considering the huge influx of emails from non devotees I was convinced Krnsa had answered to my prayer. I thanked Krsna for giving me the opportunity to taste the nectar of what it feels like to fulfil a gurumaharaj’s instruction. Only then I realised how powerful and full of nectar my gurumaharaj’s instructions are if carried out sincerely. My attitude to life has changed 10 fold following this one episode, recounts Sukanti Radha.
Mayapur Worldwide assists in bringing people to Mayapur, and for an afternoon, succeeded in bringing Mayapur to the people which is one of the main aims and objectives of Mayapur Worldwide. Even if due to constraints people may be unable to embark upon their journeys in the immediate future, they have been inspired to have the resolution to aspire toward it.
The entire campaign was a team effort from the Mayapur Worldwide team in UK; I would not have been able to achieve this without their support says Sukanti Radha and we are very grateful to Divesh Maharaj and his efficient team of Vaishnava forum, New Sri Mayapur Dham in South Africa to assist us.
If you would like to visit Mayapur or would like to organise a Mayapur Inspirational or Promotional talk in your temple or country then please contact Sukanti Radha devi dasi by email mayapurworldwide @pamho.net or tel. (+44) 07803608641 or visit www.mayapurworldwide.org