On February 14th, all members of ISKCON’s Governing Commission attending the Annual General Meeting in Mayapur, India assembled in the center of a construction zone. It was the construction zone of the long-awaited Temple of Vedic Planetarium (TOVP), a massive and impressive temple dedicated to displaying the Vedic view of the spiritual and material worlds. 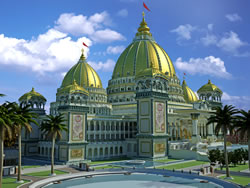 The TOVP will become the new home to Sri Sri Radha Madhava, Sri Pancha Tattva, and Sri Narasimhadeva, the Deities of ISKCON Mayapur. According to Srila Prabhupada’s desire, however, the TOVP will also house a functioning planetarium, exhibit halls, a library, and classrooms dedicated to the research of and education on Vedic cosmology and science.

Construction of the temple officially began this year. The grounds of ISKCON Mayapur’s campus that extends from Srila Prabhupada’s Bhajan Kutir to the Chakra Building to the edge of the Conch and Lotus Buildings have been cleared and are now home to two lofty pile drivers. To create the foundation for such a massive structure, 2,600 tubes will be hammered sixty feet into the ground. The tubes are then filled with concrete and reinforced with stainless steel rods. To insure the longevity of the building, six million dollars of the TOVP budget will be spent on stainless steel.

February 14th marked the Temple of the Vedic Planetarium’s inauguration ceremony, and thus the entire GBC body was asked to participate.

A simple pandal was set up for the ceremony in the center of the TOVP’s footprint, now outlined in chalk. GBC members were seated in two rows as Hari Sauri Prabhu introduced Niranjan Babu, the Vastu expert and Vastu consultant for the TOVP project. Niranjan Babu is considered one of the leading Vastu experts in India. He is also the son of famed astrologer BV Raman and is the chief editor and publisher of the Astrological eMagazine.

As kirtan began under the shade of the pandal, GBC members and members from the TOVP team were individually invited to help place a specific copper plate into each hole. Crowds of devotees ran to one location after another as the plates were successively placed, and everyone enthusiastically chanted the Hare Krishna Maha-mantra as each plate went into the ground.

The inauguration ceremony concluded with an opulent feast, sponsored by the TOVP team and served out in Gada prasadam hall to all of the devotees in Mayapur. For more information on the Temple of the Vedic Planetarium project, please visit www.tovp.org