By Rajaram Dasa
IAS officer and President of Vishwa Mangala Gou Grama yatra Andhra Pradesh, expressed his deep appreciation to ISKCON’s effort in cow protection not only in India but across the world. 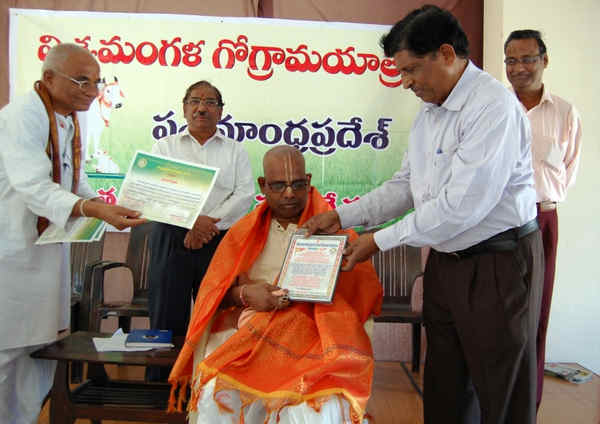 “ISKCON is probably the single largest organization in the world to run maximum number of Goshala’s across the world.” Speaking at the Vishwa Mangala Gou Grama Yatra’s conclusion program held last Sunday in Hyderabad Mr. Uma Maheshwar Rao Rtd. IAS officer and President of Vishwa Mangala Gou Grama yatra Andhra Pradesh, expressed his deep appreciation to ISKCON’s effort in cow protection not only in India but across the world.
He thanked ISKCON devotees across the world to have taken up the cause of Cow Protection so overwhelmingly that if you Google “Cow Protection” you come across maximum pages belonging to ISKCON and its allied organization. This he said is a proof of how ISKCON is a specially empowered organization which can show the righteous path and proper direction to today’s misguided society.
His Grace Srivatsa Das, President of ISKCON New Naimisharanya Farm, Dabilpur Medchal, Hyderabad was called upon the stage and was honored in the august presence of elite citizens of Hyderabad. They appreciated his dedication in running a very nice Goushala at ISKCON New Namisharanya Farm.
Speaking at the occasion H.G. Srivatsa Prabhu said how Srila Prabhupada instructed his disciples and followers to take up cow protection seriously he quoted Srila Prabhupada that “Progressive human civilization is based on brahminical culture, God consciousness and protection of cows. All economic development of the state by trade, commerce, agriculture and industries must be fully utilized in relation to the above principles, otherwise all so-called economic development becomes a source of degradation. Cow protection means feeding the brahminical culture, which leads towards God consciousness, and thus perfection of human civilization is achieved. …
He said that today world is faced with all kind problems like never before and only fool proof solutions to all problems of Human civilization is in Srila Prabhupada’s books. He stressed that Srila Prabhupada’s instructions need to be taken up seriously by all noble men and women in this world.
He said that Srila Prabhupada wanted to established a Huge ideal Farm community at New Naimisharanya at ISKCON Medchal. He said its one of the very few farms of ISKCON which was directly established by Srila Prabhupada .
Srivatsa Prabhu invited all the citizens to come forward in fulfilling Srila Prabupada’s Dream of establishing a Magnificent Farm Community and Krishna Balaram Temple at New Naimisharanya Farm.
He offered to established a self sufficient Goushala and expand the existing Goushala from 50 cows to 500 cows if all citizens support and actively participate in Srila Prabhupad’s Mission of Krishna Consciousness centric, cow based self sufficient rural community.
Rajaram Dasa Executive Member, Andhra Pradesh Goushala Federation. Social Entrepreneur, Promoter: Panchagavya Health Products, Sustainable Cow based Economy for Rural Development.