By Lakshman (das) Vrindavan (IN)
Govardhana Puja, Go-Puja and Annakuta are all connected with the story of Lord Krishna’s lifting of Govardhana Hill to protect the inhabitants of Vrindavan. As part of the festivities, devotees prepared a big hill out of sweets, rice and halva in the middle of our temple courtyard. 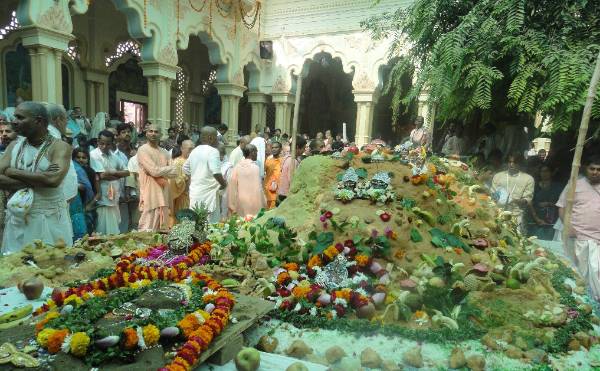 Govardhana Puja, Go-Puja and Annakuta are all connected with the story of Lord Krishna’s lifting of Govardhana Hill to protect the inhabitants of Vrindavan. As part of the festivities, devotees prepared a big hill out of sweets, rice and halva in the middle of our temple courtyard. Large quantities of bhoga were cooked by devotees and they were offered to the Deities. Afterwards the Lord’s prasad was distributed to everyone. This is known as the “annakuta” ceremony. Cows were also honored in a special ceremony at the Bhaktivedanta Swami Goshalla by hundreds of devotees from different parts of the world including many senior Prabhupada’s disciples.

The term “Govardhana” has two meanings. The word “Go’ means cows, and “vardhana’ means nourishment. Another meaning of “Go” is senses and also “vardhana” means to increase the attachment of the senses towards Sri Krishna. Sri Giriraja is the best example of one whose senses are very attached to Sri Krsna. Sri Giriraja kindly blesses the devotee by increasing his bhakti. Thus, by residing on the foothills of Sri Giri Govardhana, one’s senses and one’s activities becomes purified to serve the Lotus Feet of Sri Sri Radha Krishna.

As Srila Prabhupada relates in the Krishna book (chapters 24 and 25), Krishna dissuaded his father, Nanda Maharaja from performing the ritualistic sacrifice to Lord Indra and in return, He encouraged the residents of Vrindavana to exclusively worship Govardhana Hill.

All the cowherd men of Vrindavana made an arrangement to worship King Indra. Since Vrindavana is a village of vaisyas (farmers and dairymen), they especially depend on rain to grow their crops and to feed their cows.

However, Krishna persuaded Nanda Maharaja and the cowherd men to abandon the worship of Lord Indra and instead to use the preparations they already have to worship the cows, the brahmanas (priests) and Govardhana Hill. He instructed His father to prepare delicious foodstuffs which were made from grains and ghee. Krishna ordered that this feast be offered to Govardhana Hill with Vedic mantras chanted by qualified brahmanas. He instructed that the cows be decorated and fed to their full satisfaction. Keeping the cows before them, the inhabitants of Vrindavana circumambulated Govardhana Hill.

While all of these activities are being carefully performed, Krishna expanded Himself into a gigantic transcendental form and declared to the inhabitants of Vrindavan that He is non other than Govardhana Hill. Giri Govardhana accepted all of the offerings made during the ceremony.

Being proud of his position as the King of the demigods, Lord Indra took great offense from Lord Krishna. Lord Indra attempted to chastise Krishna and the inhabitants of Vrindavan by calling the samvartaka clouds (used to inundate the world at the end of each cycle of yugas). Lord Indra instructed the clouds to destroy all the cows, the Brajavasis and their villages.

Lord Krishna offered protection to the cowherd men and women by lifting Govardhana Hill so that they could take shelter underneath from Indra’s wrath. Krishna exhibited His supreme mystic power by holding the mountain aloft for seven days with the little finger(pinky) of his left hand. ISKCON Vrindavan celebrates this remarkable pastime by observing the festival called Govardhana Puja and Go Puja. A very wonderful and ecstatic Govardhan Puja took place at the Krsna Balarama Mandir today with over two thousand devotees from all over the world worshipping Him and glorifying His holy name.

After the 7:15 am – Darshan Aratik, Srila Prabhupada and the utsava murtis of Krishna and Balaram on their respective palanquins, proceeded towards the Bhaktivedanta Swami Goshala. A roaring kirtan and ecstatic dancing by two thousand of devotees followed Them on the way to the goshala. Srila Prabhupada and Sri Sri Krishna Balaram were warmly welcomed upon reaching the goshala by the devotees. They then visited all the cows.

A big pandal and a nicely decorated stage welcomed Their Lordships and Srila Prabhupada. A sitting arrangement for all of the devotees was beautifuly arranged. HH Kadamba Kanana Swami performed the Go-puja while the other devotees are feeding the cows with their own hands. HH Bhakti Visrambha Madhava Swami, HH Bhaktirasamrta Swami, HH Kadamba Kanana Swami and HG Panca Gauda Prabhu gave short speeches glorifying the cows and the importance of simple living and high thinking.

The Abhishek of Sri Sri Giriraj Govardhan commenced at 10:30AM at Krishna Balaram’s main altar while everyone was ecstatically chanting the Hare Krishna Maha mantra.

A big Govardhan hill was artistically decorated by the devotees in the Temple Courtyard. The general tradition includes the building of a hill by cow dung or stone hillock that symbolizes the Govardhan mountain. Then the devotees circumambulated the hill while ecstatically chanting and dancing around the hill.

May Sri Giri Govardhan bless us all with Krsna prema and eternal shelter under His Lotus feet!