ISKCON Visakhapatnam just concluded week long Residential Bhakti yoga Summer Camp. The following article was submitted by a Summer camp Student for the May issue of voice of krishna magazine. Wanted to share with all of you…. 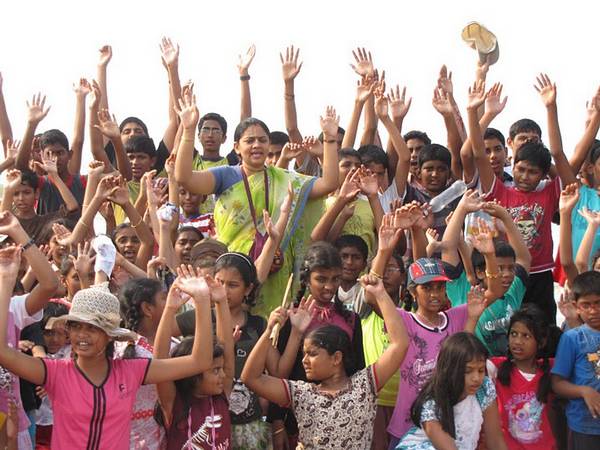 I am 14 and I rarely go to a temple except ofcourse before exams, to pray to get good marks.

Well it all started like this, I was as usual busy playing game on my Computer and my Mom was in the kitchen cooking, my father came in saying he came across this Bhakti Yoga Residential summer camp pamphlet at the RTC Complex and both my parents buried themselves into it, I was unaffected until they told me they have decided I will be going there. I immediately protested ” I am not going anywhere” How can you expect me to waste my precious summer holidays by living in a temple and do Hare Krishna-Hare Ram. No way! It took lot of coaxing from their side, promises and bribes
(Sony Play station if I complete the whole week there) and finally my bag was packed and I was on my way to the ISKCON temple at Sagarnagar.

Once there we were asked to register our names and sit inside the temple. Fruit juice was served. It was cool and refreshing. After all most all the parents were in with their children and luggages, they took the parents to a Seminar hall for orientation classes, and one Prabhuji (in ISKCON all the ladies are addressed as Mataji and all the Men are addressed as Prabhuji) told us very funny stories from Mahabharath. After that we kissed our parents good bye and were guided to our rooms. After reaching their, we saw the daily time table which was pasted on the door. After seeing the first line I was almost going to faint and fall down if my room mate would not have holded me . It said Wake up at 3.45 am and go to Mangala Aarati. Why would they want to have Aarati in middle of the night ? I though it’s too much sacrifice for a Sony Play Station.

I made friends will all my room mates. Every room had one care taker Mataji. In our room we had Laxmi mataji. At 3.40 am she woke us up, very reluctantly we took bath, and went down to the temple room. After blowing the counch shell three times they opened the curtain and we observed that Radha Krishna were dressed very simply yet elegantly in different colored dress, then yesterday. The aroma of the Incense, the soft rhythm of the divine bhajan, the dim light of the temple room, it was like we were transported to some celestial world. After Aarati, we all got to pour water into the tulasi plant. After that they circulated a mala and we were made to chant “Hare Krishna 108 times. Then we did Yoga and Pranayam followed by walking 4 rounds of the whole premises. When we started walking we watched mesmerizing sunrise on the Ocean line, a large glowing sphere rose slowly into the dull morning sky. Casting sunbeams in every direction while it illuminated the whole premises. We stared as the colors made by the rising sun changed, growing more vivid with the passing time. Making the sky more radiant as it climbed higher and higher into the sky. The location of this temple is breathtaking I thought. When you open the main door of the room you can see hills and hills lined up as if they are standing in an assembly and if you open the balcony door you can see the massive ocean and the sounds of the huge waves. It was awesome, even the air is so sweet here, you don’t want to breathe only, you want to gulp the pure fresh air.

After walking we were given a appetizing health drink, and taken to Goshalla. The cows were so big & huge and they were mooing all the more on seeing us. We out numbered them, they were 57 and we were 103 children. We imitated them and succeeded in making more noise than them. Prabhuji said we can feed them with bananas and dry grass. We had so much fun in doing that , when we went back to the room we ourselves were smelling like cows. After freshening up, we went for breakfast. I was so hungry, I never felt that hungry at home, I ate like a monster. Was it the food , or because of the physical exercise or bécoz we got up early in the morning, I don’t know, but I ate 3 dosas, 2 glasses of butter milk and one whole banana.

After breakfast we went to the seminar hall for our first Gita Class. Gita course books were handed over to us and Mataji started explaining from the book. She spoke so well, we could not take our eyes away from her, we don’t know how 3 hours passed, and only at the end when she got up to say, that now we will have painting class, did we realize the time.

After painting we went straight for lunch. It was smelling so good, could not wait to dig my hands into it, but for the prayer they make us do we have to lift both our hands in the air and chant Hare Krishna , however both my eyes where glued on the food only. It was so yummy, specially sweet rice, looks like they got it straight from heaven.

According to the time table we are supposed to take rest after lunch, but Mataji’s class in the morning left us with so many questions and curiosity for the next class that we could not sleep. We did the home work assignment she had asked us to do and went down for Sloka memorization class after which hot hot samosa’s with tamarind chutney were served to us and then we were left to the open ground for outdoor games. Girls played kho kho and boys throw ball.

After sweating it out we rushed to our room, took a quick shower and came down for Sandhya Aarati. Sandhya Aarati was so melodious, we danced wildly, jumping in the air swaying to & fro it was wonderful. We felt so blissfull.

After Aarati we sat outside on the porch of the temple looking at the stars enjoying cool ocean air and Mataji told us pastimes of Jagannath Baladev and Subhadra Devi. I have no words to express just wished that the time stopped there, stories under the star was one the best session in the Summer camp. After that we went for dinner. Once back in room we wrote a recap of our days activities in a diary .Mataji had given us an assignment ,the story she told us had to be depicted in a drama form in two days. Girls vs Boys was the competition. I kept thinking of the screen play and dozed of to sleep.

Next day was a similar routine with an addition of stitching classes for girls and Carnatic vocal singing classes for all. Apart from all the different classes, I used to look forward to breakfast, Lunch, Snacks & dinner. We had everything we wanted to eat right from Pavbhaji, Panipoori, Pizza, Sandwhich and not to mention the sweets like Jalebi, Rasagulla, Gulabjamun etc. One of the best activity we enjoyed was the Treasure hunting. They hid the pictures of Radha & Krishna, all over the premises and we searched every where, in goshala (I even dug my hand in cowdung) garden, mechanized kitchen, temple hall ,seminar hall, homeopathy clinic , guest house, construction godown ,paint godown, near lotus pond, tulasi mandir just about every where . I managed to get one from the flour container in the kitchen.

The classes by Mataji were getting more & more interesting day by day. She told us about Lord Krishna the supreme personality of Godhead, Law of Karma, law of transmigration, Rebirth, existance of the Soul, Other lokas, stories of the devotees of lord Krishna, Srila Prabhupada’s Life story and how to go back to Godhead our Original home Goloka. On one evening she showed us a video on meet your meat and it was so astonishing. All of us promised not to eat meat in our life ever again. She also told us the importance of chanting Hare Krishna Mahamantra.

We presented skit on Prahlad Maharaj’s life and Sudama-Krishna. Boys did Sita svayambar and Advent of Jagannath. Both won one prize each. We also had singing competition room wise, and my room 208 won the prize. On thursday morning we had jogging and sports on the beach. On the last night, we had a farewell party hosted by temple devotees for us, kind of a Awards night, awards like the best student, the best singer ,the best kept room etc were given.

On the last night we cried we did not want to leave the temple and go. I remembered how we made a mockery of Hare Krishna Mantra and of the shikha(pony tail) of the devotees when we first came in and here we were completely fallen in love with them.

We just came like guest, and never knew we will become part of this. We felt like we were leaving a long known family. We asked Mataji why this is happening to us , she told us that we all originally where together in Goloka and we are indeed a family and krishna is the supreme father. Temporarily we have forgoten but by chanting the memory is revived again. Even the temple devotees cried , Mataji cried.

On the Sunday morning when our parents came to take us back, they were not able to understand why we were crying, they asked us what happened? Did somebody say something to you? and we had no reply. I am taking beautiful memories home and I will cherish them my whole life. I promise to continue chanting, eat only prasadam and read Srila Prabhupada Books, when I grow up I will also became a soldier in Srila Prabhupada’s army against maya.

you can see the photos of our camp by pasting the following link in your browser;-