by Vraja Bihari Das for back to Godhead Magazine
Ambulances sounding their sirens screech to a halt. Bodies, mutilated beyond recognition, keep pouring in. Ten kilometers north, another blast—the seventh in eleven minutes—has terrorized the city. As anxious and bereaved relatives rush in, the neighborhood and the media are hysterical. Local politicians vie for space on news channels. Meanwhile, the staff at Bhaktivedanta Hospital quietly rushes to offer their service to another victim of the mindless carnage.

On this fateful night as many succumb to their wounds, the Spiritual Care team at the hospital comforts the grief-stricken families while the medical team saves hundreds of lives. The traumatized relatives spend the long and anxious night soothed by Srila Prabhupada’s chanting of the holy names, resounding on overhead speakers. As Lord Jagannatha’s miniature cart reaches out to each bed, Mr. Lalge, wailing in pain, offers a silent tear in gratitude. Each day for the next two months, while Mr. Lalge battles for life and eventually survives, Lord Jagannatha will come to his bed and look upon him mercifully. 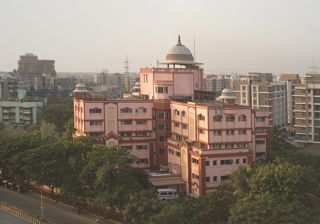 A Hospital-Temple
“Please do not remove your footwear,” announces a prominent notice at the entrance to Bhaktivedanta Hospital. I can’t help smiling, realizing that any first-timer could easily mistake this building for a temple. Welcoming visitors to the hundred-bed state-of-the-art hospital are a sparkling lobby, a regal deity of Srila Prabhupada, and soft chanting of Hare Krishna on the two hundred overhead speakers placed everywhere from the reception area to the mortuary. Bhaktivedanta Hospital is located in a noisy, crowded northern section of Mumbai, amid schools, colleges, and, in the same complex, an ISKCON temple. The ambience inside is a refreshing contrast to the honking rickshaws, traffic fumes, and burning asphalt outside.
Inside, Ramasharana Dasa greets me with a buoyant smile. A member of the Spiritual Care team, he is happy to show me around the hospital. Now in his mid-thirties, Ramasharana relinquished a lucrative career with the government-owned Canara Bank and joined the hospital seven years ago. His wife, Kshama, who also worked in the private sector, in now an officer in the hospital’s administrative department. What prompted this couple to change their careers?
“We were both keen to be at a workplace that was spiritually surcharged, and where we needn’t feel apologetic for being devotees,” says Ramasharana, who is also a popular actor in the annual drama festivals organized by the devotee community.
Echoing similar sentiments, Ms. Sumedha, who has worked with the human resources team for over a decade, feels that her weekly need to visit a temple, a practice since childhood, attained perfection when she joined the hospital.
“Now it’s a temple visit daily,” Sumedha says with a smile.
Doctors I see every Sunday at the local ISKCON temple, clad there in the traditional Vaishnava attire of dhoti and kurta, now look different. They sport beautiful clay Vaishnava tilaka on their foreheads, but wear shirts, trousers, and neckties. They look busy. Giving last-minute instructions to their assistants, they hurry to another appointment, but not before greeting me with a personal touch of “Hare Krishna.”
As I enter a fourth-floor ward, I see that the hospital provides for almost all major specialties. I silently celebrate the festive blend of professionalism and devotion. 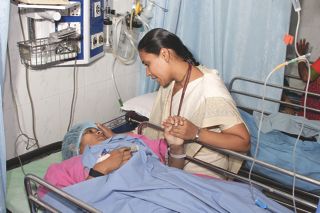 Spiritual Care in Action
I soon notice that the place doesn’t smell like a hospital. The fragrant incense lends a spiritual touch, as do the walls adorned with beautiful paintings of Lord Krishna.
“This has a deep psychological effect and goes a long way in healing the patient,” asserts Damodara Pandita Dasa, a senior counselor to the patients and their relatives.
A person admitted to a hospital carries an emotional burden, he reasons. Financial pressure, family stress, and work-related trauma are common stress inducers and tend to play on the mind of the patient, thereby worsening his or her condition. Bhaktivedanta Hospital has a team of counselors under the Spiritual Care team that addresses these needs for patients and their relatives. This is to serve the mission statement: “With love and devotion, we will offer everyone a modern, scientific, and holistic health care service based on true awareness and understanding of the needs of the body, mind, and soul.”
Through counseling, the troubled souls are made to see themselves in a new light.
“We tell them that the body is just like a covering and they should learn to detach themselves from the body and concentrate on purifying their souls,” says Damodara Pandita. “This concept works like a tranquilizer and helps ease their troubles.” 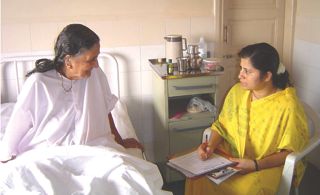