A review of Bhurijana das’ My Glorious Master
By Patita Pavana das Adhikary
In a previous article I mentioned that in 1969 “I was one of three devotees at the first Woodstock”. But no, there were four shaved-up brahmacharis in dhotis (and a number of future devotees, as I have since learned). My memory has been jogged by a recent reading of our Godbrother Shriman Bhurijana das Prabhu’s wonderful book My Glorious Master. 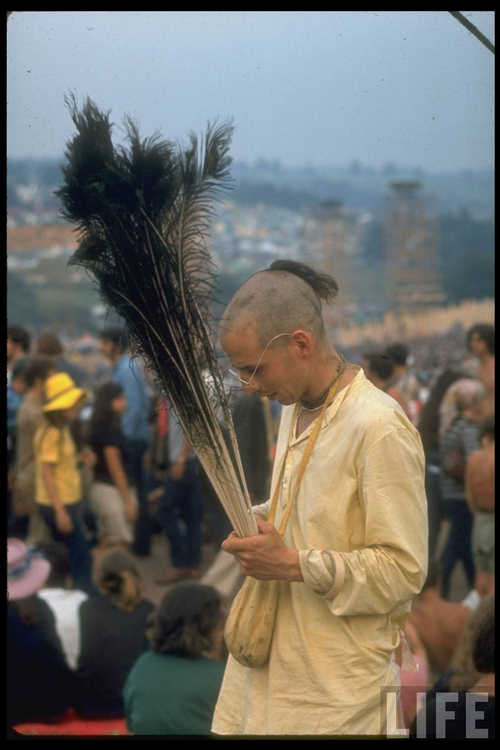 In a previous article I mentioned that in 1969 “I was one of three devotees at the first Woodstock”. But no, there were four shaved-up brahmacharis in dhotis (and a number of future devotees, as I have since learned). My memory has been jogged by a recent reading of our Godbrother Shriman Bhurijana das Prabhu’s wonderful book My Glorious Master.

Yours truly was the only devotee from the New York Hare Krishna Temple, but the entire Chapel Hill, N.C. ISKCON crew, numbering three, as seen below, hitch hiked the six hundred miles up to Woodstock, NY to spread the message of sankirtan. The following passage from Shriman Bhurijana das’ book sets to rest the issue concerning which devotees were there preaching at Woodstock in 1969. It is taken from part 8 of Chapter Four (“Buffalo to Chapel Hill, 1968-69”). Here then is Bhurijana Prabhu’s…

Toñaëa Kåiñhëa, Våndävana Chandra (who had recently come to assist us), and I heard about Woodstock, the upcoming giant music festival and decided to attend and preach. We hitchhiked from North Carolina to New York City and then on to Woodstock. We had no idea what to expect when we arrived.

Tens of thousands of young and hip citizens of East Coast America had converged on Woodstock’s barren farm fields. Although tickets were sold for the event, no one was prepared for the size of the turnout. The promoters gave up demanding payment or checking tickets. They were moved by the spirit of the ‘60s and they opened the gates to all. Throngs of young men and women channeled through and became part of the “happening.” This was the event and they were part of it. Countless gaily dressed hippie pilgrims milled around and danced, or sat absorbed in the intoxications of the moment and the music from the main stage.

They had traveled on Kali’s call to Woodstock. Their mood was accepting, so they accepted us with our shaved heads and Indian dress. We held kértana in the evenings and many joined in the chanting. During the day, we handed out incense and peacock feathers and asked for donations. We also looked for opportunities to preach.

One evening I attempted to chant on the main stage by disguising myself as a follower of Swami Satchidananda, the bearded and trendy Uptown New York haöha-yoga guru. As he and his followers marched up the ramparts to the stage, I followed behind waving my bundle of peacock feathers up and down, looking like the final member of their entourage. But my attempt was foiled at the last moment by a yoga student, and I was ordered off the stage. (Years later, I met Swami Satcidananda in Hong Kong and he showed a movie of his exploits in the West. The screen filled with a shot of the Swami and his students walking onto the Woodstock stage. Behind his head, I could clearly see my bundle of peacock feathers waving up and down. “Hey, that’s me,” I proudly told him.)

We were determined to chant Hare Kåishëa onstage. On the final evening, we were given permission to chant side-stage at the “Hog Farm.” The weather was threatening and it was already dark. The rock group’s electric guitars were screaming out heavy metallic blues notes. The lead singer called to the crowds, “You are moving the sun! You are moving the moon!” The blues notes bent, the bass guitars thumped, the drums thundered, and the crowds went wild in the dimly lit, cloud-covered night. Dancing with abandon, eyes turned upward, with and without partners, the audience clapped and approved of the band’s reminder that mankind is God.

We were the next act. In that moment of demonic insanity, we walked onstage with karatälas and our simple message. “Chant Hare Kåiñhëa and be happy. We’d like you all to chant with us.” Our chant began and a few from the audience joined in.

Suddenly, we heard loud, antagonistic cries, “Shut up! Stop chanting!” The fever of the protests increased but we kept chanting. “Shut up! Stop that chanting! Rock is our soul!” We heard and recognized the black leather jackets of the “Mother-F______,” a New York City motorcycle gang, as the leaders of the dissent. We kept chanting and they stepped up their protest. We chanted faster. We saw gang members standing up and moving toward the stage. “How can we stop chanting,” I wondered, “but how can we continue?”

“Hare Kåiñhëa Hare Kåiñhëa, Kåiñhëa Kåiñhëa Hare Hare,” we chanted into the microphone. Our eyes scanned the dark toward the crowd; our ears weighed the sound of responding chanters against the calls of angry protesters. Suddenly, just as the tension began to peak, the electrical generator exploded and the power was cut off. Darkness fell like a stage curtain. Our act was over.

That night a heavy rain fell, halving the Woodstock fever. The crowds were drenched and the festival began to wind down. We three tired, aspiring servants of Prabhupäda, happy, but sick from the damp, began our return journey to New York City late the following morning.

Part of our gain from our weekend’s preaching was a trunk full of small coins. When we arrived at our 61 Second Avenue temple in New York, we discovered that we had collected almost $600! ISKCON was poor in those days and we were astounded at the huge size of our three-day collection. We decided to send part of the collection to Prabhupäda.

Our letter offering Prabhupäda $200 was sincere, but not in touch with the actual worth of $200. It began with flowery pomp: “My dear Shrila Prabhupada, Please accept our humble obeisances and this donation of $200 for your book fund. Please use this money to publish The Nectar of Devotion and thus save all the university students throughout the land.”
Prabhupäda, as his reply showed, accepted the spirit of our donation and overlooked its amount:

My Dear Bhurijana, Tosana Krishna and Vrindavana Chandra,
Please accept my blessings. I beg to thank you for your sending me the check for $200 for my book fund, and I think of it as a big contribution of $2,000,000. I have come to your country to carry out the wishes of my spiritual master, and you are kindly cooperating with me. Certainly Krishna will be pleased to bless you with all spiritual benediction.
I shall be glad to hear from you about your other progress in the matter of Sankirtana Party and selling BTGs. That is our main strength for preaching work. Thank you very much.
Your ever well-wisher,
A.C. Bhaktivedanta Swami

If we had thought more carefully, we would have distributed Back to Godhead magazines at Woodstock rather than only incense and peacock feathers. Back to Godhead distribution was becoming the backbone of Prabhupäda’s preaching formula.

-From My Glorious Master by Bhurijana das Adhikary

My Glorious Master is an excellent and well written history of an era of Krishna consciousness that would be lost to memory except for the few rare and valuable accounts scribed by far-sighted devotee-writers like Bhurijana. The author’s literary skill captures the reader’s interest in such a way that his journey into spirit is not only shared, but the reader becomes gradually Krishna-ized through the association. The book is rightly titled, for what greater glory can there be for a genuine spiritual master, than the absolute surrender of a sincere disciple? Therefore My Glorious Master is more than a great ride of spirited progress into devotional service. Indeed the author’s various guru-sevas—from driving a cab to laying bricks—represent “association in separation” with the glorious master at the highest level. As the author’s faith in his glorious master becomes strengthened, so does the reader’s.

Through exciting narrations, the author’s connection to His Divine Grace AC Bhaktivedanta Swami Prabhupada becomes our connection to the parampara. After all, Krishna consciousness is contagious. Shrila Prabhupada often instructed us that association with the spiritual master through vani, or carrying out his orders, is higher than direct physical or vapu association. In My Glorious Master we share the author’s devotion in both separation and personal association, thereby advancing our own attempts at loving service. Every devotee who reads My Glorious Master will gain new insights into his own bhakti through the pages of this spiritual voyage. And this is a very important journey indeed. Throughout scripture it is declared that there can be no link to the Supreme Lord without the blessings of a bona fide spiritual master appearing in the disciplic succession that leads back to Him.

My Glorious Master is available on the Vedabase under sec. 22 “Biographies and Glorifications of Shrila Prabhupada” (2003 edition).